LEGO Creator Expert 10263 Winter Village Fire Station has been announced, part of a series that is much loved by adult LEGO fans. Does it live up to the high bar set by previous releases? Three brick fanatics consider just that…

It is time to take a look at the newly announced LEGO Creator Expert set that will be available to buy at shop.LEGO.com in just a few days time. 10263 Winter Village Fire Station will allow fans to continue to expand the brick built Christmas postcard scene that enjoys an annual release ahead of the festive season. But does it live up to the demanding expectations of LEGO fans? Daniel Konstanski and Séb Daniell join Graham Hancock to take a look at the images of this set, and see if it deserves a place in the holly jolly LEGO world.

Since seeing the images of 10263 Winter Village Fire Station I have been waiting for it to grow on me, but it has not. Objectively this set is a perfect addition to the Winter Village line. It is original,so dodging the remake bullet which would have taken it down in the eyes of many had the LEGO Group opted to update one another of the early seasonal sets. All of the requisite features which have continued to make the series charming are accounted for, such that one could shout “Winter Village Bingo” (if such a game existed). There are a variety of unique and clever parts uses and enough cute Christmas accessories to leave no mistake what season this set belongs to.

Here is the problem in a (festive) nutshell – it’s a fire station and at the end of the day we have had so very many fire stations. Part of the delight of the Winter Village product line is the unique subject matter which it has produced. 10199 Winter Toy Shop, 10245 Santa’s Workshop, 10216 Winter Village Bakery , all of these have few if any similar sets in the rest of the product line. Fire stations on the other hand have been coming out every couple of years since the dawn of the minifigure 40 years ago. Slapping a winter skin on another one does not really change what it is. It feels different than last year’s train station, another type of set which there have been a lot of over the years, in that the station paired so perfectly with a set which was unique in the form of the 10254 Winter Holiday Train from two years ago.

The reality is that my perspective is strictly that of an AFOL who can conjure up the LEGO Group’s last 40 years of sets in his mind on command. The regular consumer, who likely don’t already own four different fire stations, will probably eat this up, especially since it is so nicely done. Perhaps once I can see it physically in my local LEGO Store I will be able to get excited. Until then, this is a well-executed rendition of very tired material which feels like a lost opportunity. 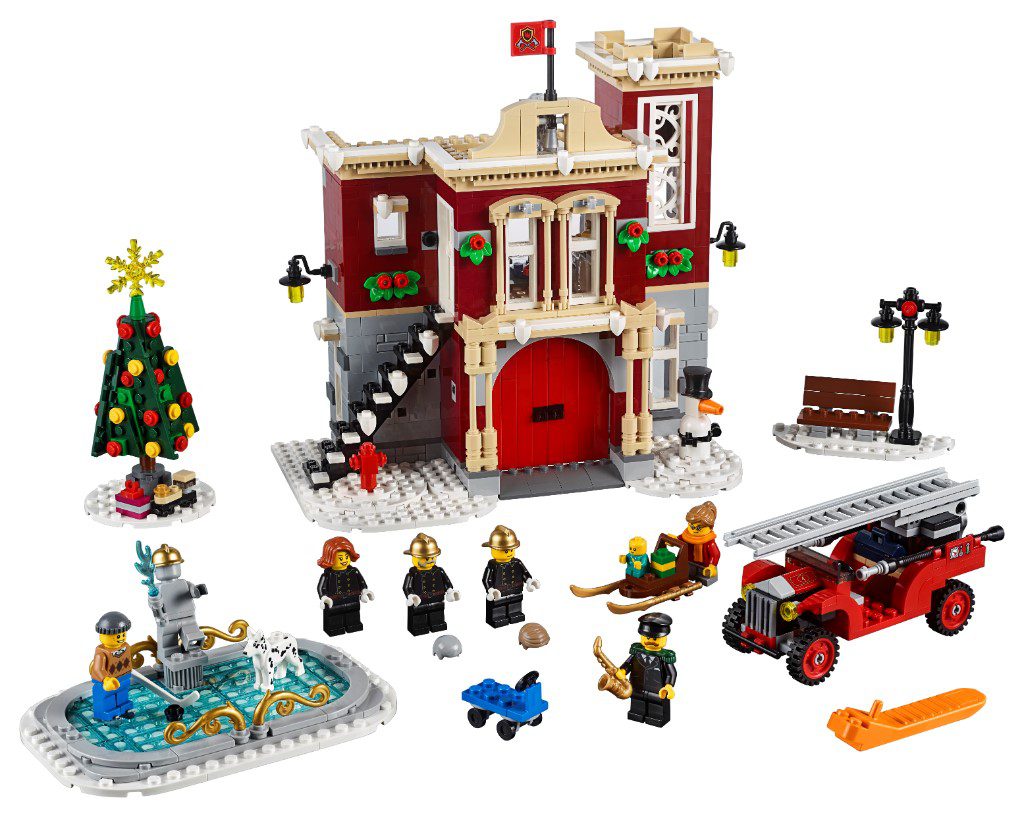 After the initial teaser images, I must admit that I was a little underwhelmed by what was on display. A slightly iffy-looking Christmas tree, a rather basic snowman, and no real signs anywhere of interesting building techniques. When comments on forums started implying a fire station was on the cards, I think the general consensus was that a fire station isn’t exactly the first thing one would associate with Christmas. Having now seen the set in full, I feel that my concerns were unfounded as this set looks like it will fit right in alongside the others.

At 1,166 pieces it’s the third biggest set from the Winter Village theme so far, and it certainly looks impressive from the front. The biggest issue I have with most of these sets is the open back, with the fire engine sticking out in this one, but completing it would cost double the price, and it does add easy access for playability.

The set looks like a lovely model though the part count is shared with a few auxiliary elements such as a bench and lamppost, mini ice rink/pond area and tree. The tree is still not anywhere near as nice as the one from 10199 Winter Toy Shop, and whilst the fire engine isn’t my favourite vehicle within the theme, the vintage design works well here. I can’t tell if it looks a little unfinished though, that will need some investigation when the set is released. There are some nice minifigures here to populate the town and the exclusive baby torso print is sure to be a big draw to the set.

Overall, I think the colour scheme works well and this set is a welcome return to form after the slightly less desirable train-related sets from the last two years. 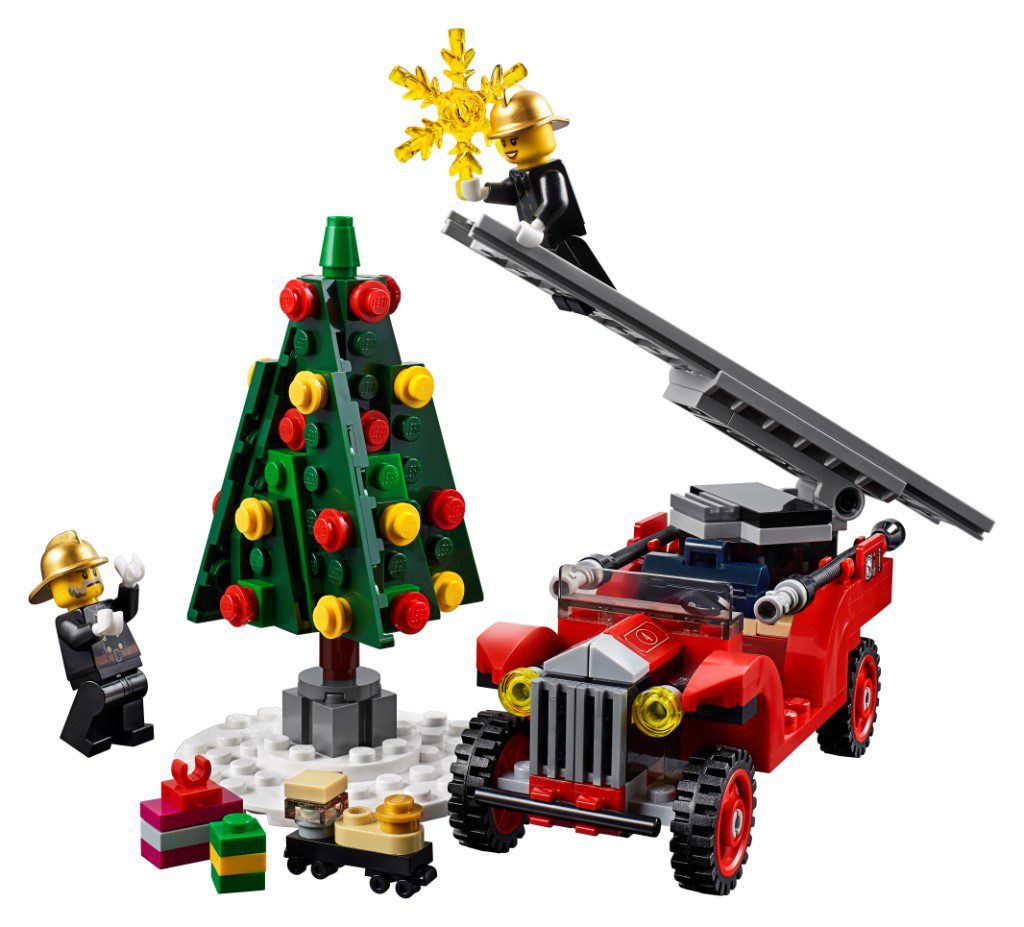 It must be tricky at this point for the designers behind the Winter Village series to come up with new concepts. Classic Christmas associated buildings have been largely covered, so now the decision must be made to go with equally quaint, but perhaps more obscure fare that would appeal to adults, or go down the route of offering something that children will instantly recognise but has fewer festive associations.

Although my preference would have been the former, the LEGO Group opted for the latter. A Fire Station would not be high on my list for inclusion in this world of perpetual snow. But seeing the pictures may not have changed my mind about the relevance, but certainly has me feeling impressed with the execution.

The building is a nice colour and adorned with decorations, the fountain is simple but excellent and considering the tiny interior, it looks to have a few nice details. All of the minifigures have cosy looking torsos, and with their white gloves, the fire fighters look excellent.

As for the fire truck, this is perhaps the best vehicle to be included in one of these sets since the release of 10222 Winter Village Post Office, with it capturing the non-specified but implied time that this village seems to exist in. Perhaps the ladder can be used to put the star on the tree in 10199 Winter Toy Shop rather than to reach any seasonal disasters.

But despite the execution being so great, it would have been nice to have something more relevant. Surely a Christmas café would have worked? 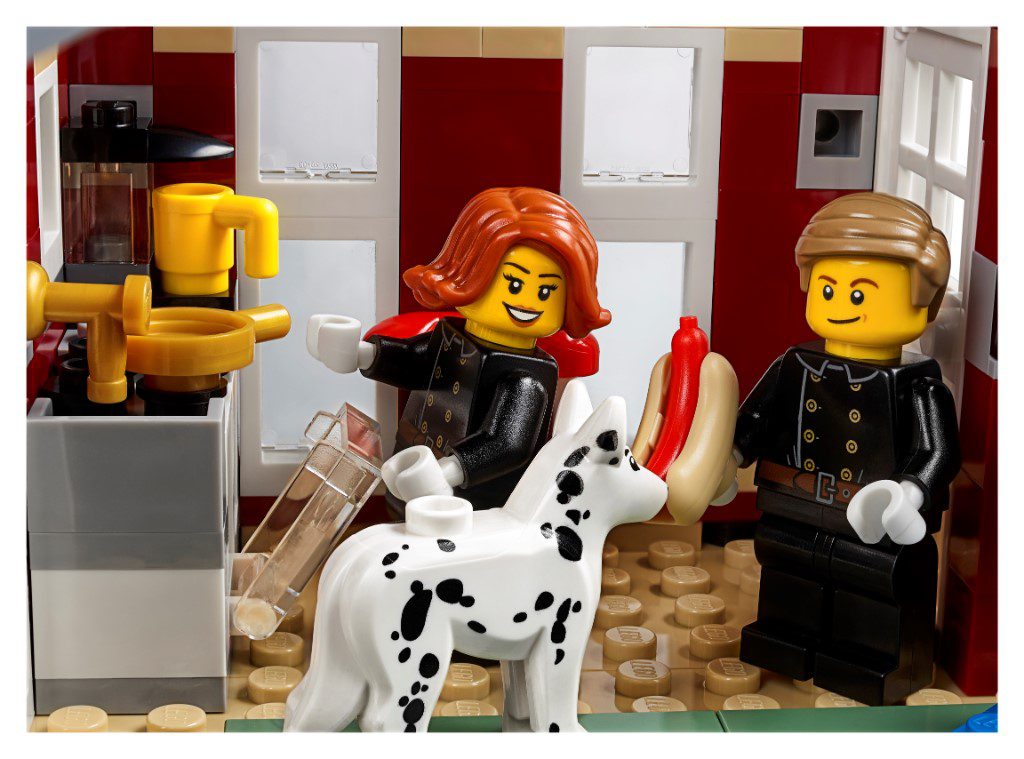