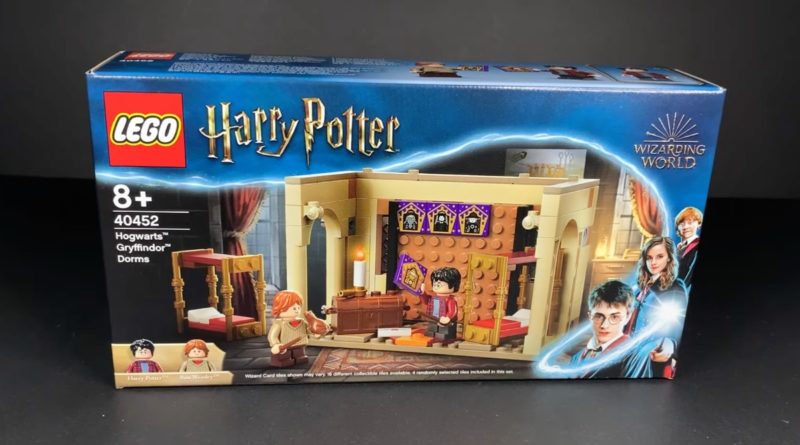 One YouTuber has secured an early copy of LEGO Harry Potter 40452 Hogwarts Gryffindor Dorms, giving us a first look at the upcoming gift-with-purchase.

Available later this month with spends of $100 in the US – and presumably £100 in the UK and €100 in the EU – on LEGO Harry Potter products, the boxed set serves as one final 2021 addition to this year’s 20th anniversary Hogwarts line-up.

That otherwise so far consists of 76386 Hogwarts: Polyjuice Potion Mistake, 76387 Hogwarts: Fluffy Encounter, 76389 Hogwarts Chamber of Secrets and 76395 Hogwarts: First Flying Lesson, all four of which can combine into one huge rendition of Hogwarts castle.

40452 Hogwarts Gryffindor Dorms follows the same approach, serving up a single room in the same template as 76386 Hogwarts: Polyjuice Potion Mistake, only with four-poster beds instead of toilets and sinks. The freebie also includes an 8×8 plate on which to display a complete collection of Collectible Wizard Cards (if you’ve managed to hunt them all down).

YouTuber SwiftBricks has already managed to acquire a copy of the GWP ahead of its release later this month, and while they’ve only shown off the box so far, it does give us a better idea of what to expect from its contents.

For instance, that 8×8 plate can be slipped out for a more conventional dormitory (with windows and everything), the set comes with four Collectible Wizard Cards of its own – a decent haul for such a small build – and it also includes non-exclusive minifigures of Harry Potter and Ron Weasley.

40452 Hogwarts Gryffindor Dorms will be available with a $100 spend on LEGO Harry Potter sets online and in-store from October 25 through November 7. Its availability (and required spend) in the UK and EU has yet to be confirmed, but watch this space.