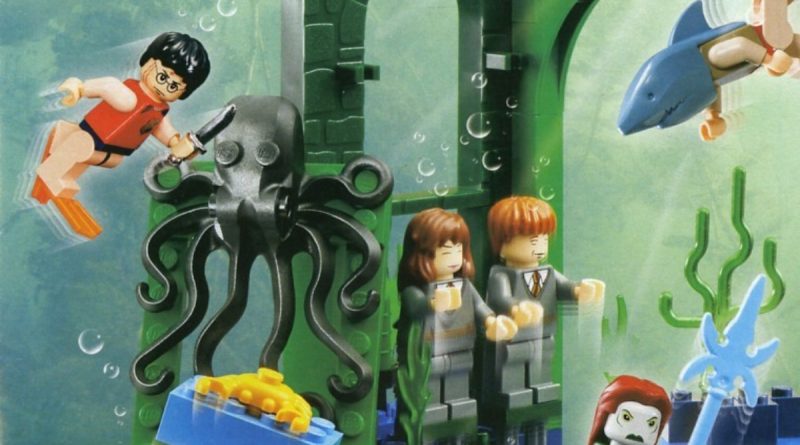 It looks like Hogwarts Moments are out and buildable house banners are in for 2023, as the Wizarding World reportedly pivots to a new type of magical product. Promobricks claims that a total of six new LEGO Harry Potter sets will arrive on shelves on March 1 next year, including at least one more addition to the modular Hogwarts system, while another six mystery sets will launch throughout the year.

Also said to be joining the range in 2023 is a fresh take on a classic 2005 set, which will be the rebooted theme’s first foray into the Triwizard Tournament’s second task. Dive into all the details below.

According to Promobricks, each of the four house banners – Gryffindor, Slytherin, Ravenclaw and Hufflepuff – will follow the same format of the Hogwarts Moments sets. That means a build that can unfold to offer a small, collapsible play scene, complete with three minifigures each. The assumption is that will be a teacher and two pupils – again following the book-based sets – but that feels less certain at this stage.

The last Room of Requirement arrived on shelves in 2020, in the previous (and now defunct) style of Hogwarts sets. But while 75966 Hogwarts Room of Requirement was based on the Order of the Phoenix, this new version will apparently take inspiration from Harry Potter and the Deathly Hallows: Part 2, complete with a fiery snake. No word yet on the minifigures, but Promobricks reckons it will include Harry Potter, Ron Weasley, Hermione Granger, Draco Malfoy, Gregory Goyle and Blaise Zabini.

Revisiting 2005’s 4762 Rescue from the Merpeople, this Triwizard Tournament set is thought to include an above-ground observation tower, along with an underwater scene. The minifigure line-up will reportedly consist of Harry Potter, Ron Weasley, Hermione Granger, Viktor Krum and a Merman, while the set is also said to include the first moulded Grindylow (a water demon derived from English folklore that appears in Harry Potter and the Goblet of Fire).

Here’s a complete rundown of all the rumoured LEGO Harry Potter 2023 sets so far:

Remember that all this information should be taken with a pinch of salt until officially confirmed by the LEGO Group.