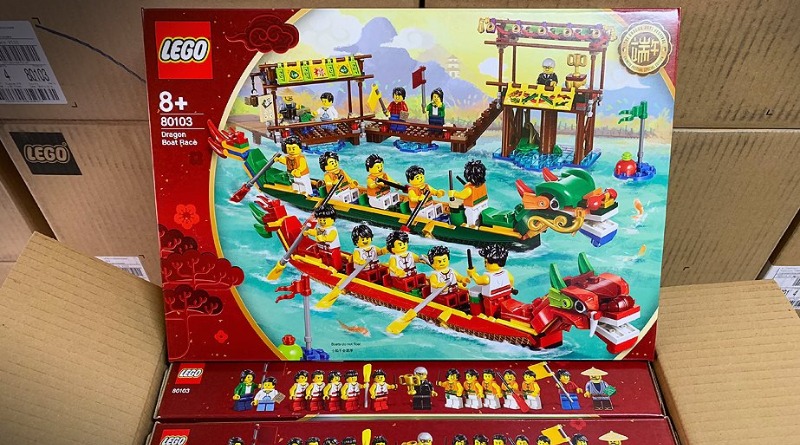 An online store based in Macau has revealed the first non-watermarked image of an upcoming Asia-exclusive LEGO set, 80103 Dragon Boat Race.

The newest set follows in the footsteps of 80101 Chinese New Year’s Eve Dinner and 80102 Dragon Dance, which both arrived in the Asia-Pacific market in January. Now, online retailer Digibee has posted an image of 80103 Dragon Boat Race, which – as the name suggests – features a pair of dragon boats, complete with full rowing teams, as well as a grandstand and podium.

Digibee is currently taking pre-orders for the set, although hasn’t provided a firm release date beyond “coming soon”, or even a price, which seems like an odd strategy when you’re trying to convince people to reserve a copy. Then again, for a set as unique as this, we doubt many collectors will be put off, whatever the cost. (The LEGO Group is clearly taking the same stance for its limited pre-release of 21045 Trafalgar Square, the price of which is still a mystery despite its designer signing event in a week’s time.)

Just like the previous two sets in this theme, the box for 80103 Dragon Boat Race features a gold medallion in its upper right corner, denoting that it’s part of the Spring Festival series. And just like those two, it won’t be available for purchase outside of the Asia-Pacific region.

“As a mission-driven business, we are committed to inspiring and developing children through creative play and learning. We are excited to announce these major launches for China at the CIIE, and our commitment to this strategic growth market and goals to provide the creative LEGO play experience to the hands of more Chinese children remain unchanged,” said CEO Niels B. Christiansen when the theme was first announced.