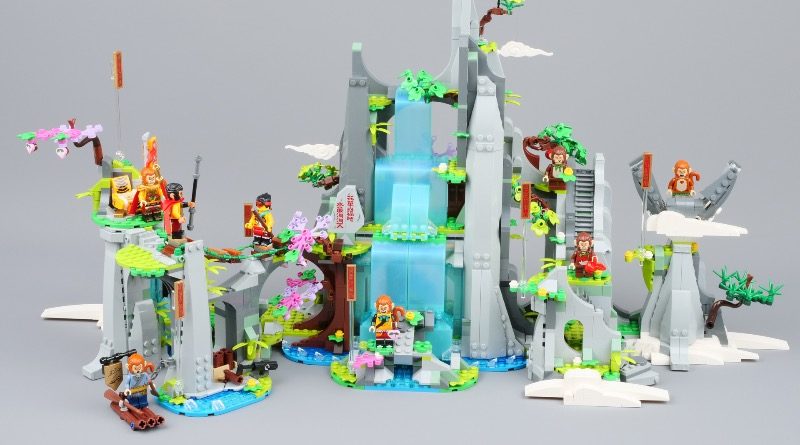 The first reviews of this year’s LEGO Monkie Kid sets are starting to appear online, giving us a closer look at what to expect from next month’s wave – including 80024 The Legendary Flower Fruit Mountain.

Eight brand new Monkie Kid sets are due to launch on March 1, including the theme’s first accessory pack. But it’s the largest set of the wave, 80024 The Legendary Flower Fruit Mountain, that’s caught the eye of most MK fanatics – and even plenty of LEGO fans who haven’t paid much attention to the China-focused theme.

That’s because the sprawling playset offers something totally different in the LEGO Group’s current portfolio, helping it to stand out from not just the rest of the sets in this Monkie Kid wave, but everything else on LEGO.com too.

Brickset has now published an early review of 80024 The Legendary Flower Fruit Mountain, so you can get a better idea of how the promising set stacks up in person.

The 1,949-piece set splits into three sections, each one referencing a specific narrative point in the Monkey King’s life. The theme is based on the Chinese legend of the Journey to the West, and 80024 The Legendary Flower Fruit Mountain looks to lean into that story more so than any other Monkie Kid set to date.

To that end, you’ll also find eight different minifigures in the box – four of which represent different stages of the Monkey King’s life, and all of which would make for a great starting point for a Planet of the Apes build. (Hey, we’re all thinking it.)

80024 The Legendary Flower Fruit Mountain will launch on March 1, alongside seven other new Monkie Kid sets. You can support the work Brick Fanatics does by ordering your MK sets using any one of our affiliate links.