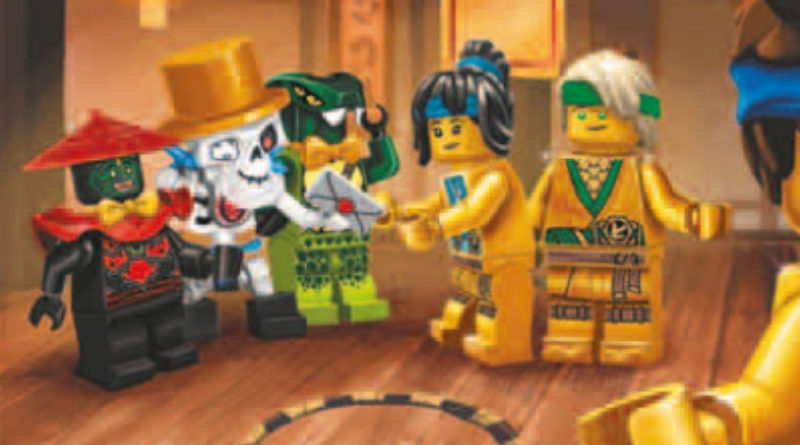 A new LEGO NINJAGO activity book has given fans a first look at a Legacy Nya minifigure, matching with the rest of the NINJAGO anniversary minifigures.

A Slovakian publishing group has revealed what may be the first image of the LEGO NINJAGO Legacy Nya minifigure, as part of a set of minifigures commemorating the 10th anniversary.

Albatros Media has added a 2021 NINJAGO activity book to its store titled ‘Golden Ninja’. Among the puzzles and stories are various characters from different seasons of the show. A lot of them are realised as minifigures in the 2021 range of sets, but one stands out.

On page 23 of the book, some of the ninja gather with their friends and enemies to pass out letters and drink tea. In the foreground, Master Wu and Jay are equipped in their Legacy outfits from 71741 NINJAGO City Gardens and 71738 Zane’s Titan Mech Battle. Lloyd and Nya are also pictured wearing their suits, the first from 71735 Tournament of Elements.

Nya’s Legacy outfit minifigure is not yet available yet is pictured here with a new headband variant piece for her hair and a gold design with a black and blue design running down the middle.

Both Zane and Nya are missing their outfits with the other four ninjas and Master Wu all having theirs throughout the 2021 LEGO NINJAGO sets. Nya’s inclusion here suggests that they haven’t been forgotten and may make appearances in minifigure form in the future.