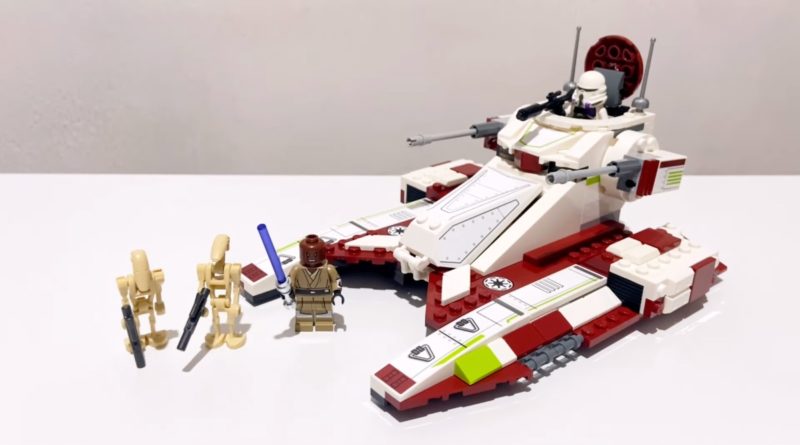 LEGO Star Wars 75342 Republic Fighter Tank has yet to be officially revealed, but you can already see the set and its six minifigures come together in a new speed build video.

The 262-piece set was originally discovered on shelves in Guadalajara, Mexico earlier this week. YouTuber Commander Bricks has now managed to purchase a copy at retail, and has wasted no time at all in publishing a speed build video to their channel – giving us our best look yet at its brand new Mace Windu and Clone Trooper minifigures.

This is the third iteration of this vehicle released by the LEGO Group, following 2008’s 7679 Republic Fighter Tank and 2017’s 75182 Republic Fighter Tank. And like both previous sets, it’s based on The Clone Wars TV series, as indicated this time by the box art – there’s a 332nd Company Clone Trooper in the bottom left – and the new arm printing on Mace Windu.

The minifigure matches the Jedi as he appears in the Clone Wars TV series, with asymmetrical white gauntlets across either wrist. It’s essentially the most detailed version of Mace Windu to date – and that includes the one in last year’s 75309 Republic Gunship.

Also included in 75342 Republic Fighter Tank are two purple-tinted 187th Legion Clone Troopers and a 187th Legion Clone Commander, all of which are seemingly based on action figures originally produced by Hasbro. The markings on the 187th Legion troopers in canon are more dark red than purple, while Hasbro also referred to an Airborne Trooper as a Commander in its 2007 box set.

Beyond just the minifigures, Commander Bricks’ video also shows us how the tank itself comes together, including the reversed X-wing cockpit for its front hatch. There’s ample space inside the tank for all three of its Clone Troopers (even if one of them does have to lay flat), where you’d be hard-pressed to fit even two in the version from 2017.

There’s no word yet on price or wider availability for 75342 Republic Fighter Tank, but rumours suggest it’ll retail for $39.99 in the US. If that’s true, we’re expecting a UK price tag of around £34.99.