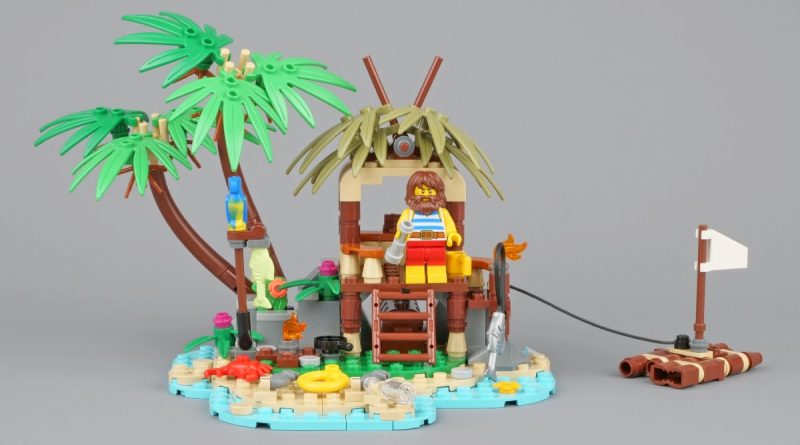 Early reviews of LEGO Ideas 40566 Ray the Castaway are washing up online, giving us our first look at next month’s brand new gift-with-purchase.

Based on a design by user DadiTwins, who took pole position in last year’s LEGO Ideas coastal contest, 40566 Ray the Castaway depicts a detailed island scene that’s bursting with colour. You’ll be able to get your hands on it from October 1 to 13 with all purchases above £120 / $120 / €120 – right on time for brand new sets including 76215 Black Panther, the entire Avatar range and 21336 The Office.

The finalised 40566 Ray the Castaway hews closely to DadiTwins’ original submission, with only minor tweaks – such as swapping the raft’s minifigures legs flag for a more conventional piece, including a parrot rather than a seagull, and widening the hut from four to six studs. It’s even maintained the ‘SOS’ on the beach, comprised of a life buoy and two stone snake heads.

Brickset is among those to have reviewed the set already, deeming it ‘a very well-designed, detailed, attractive and desirable gift-with-purchase, one of the best this year’. That’s high praise, but with so much launching on Saturday, October 1, you probably don’t need too much of an excuse to buy enough LEGO to reach its £120 / $120 / €120 threshold.

If you can hang on a couple more days, meanwhile, you’ll also be able to acquire it by purchasing 10308 Holiday Main Street (and another £30 / $20 / €20 of LEGO) or 75331 The Razor Crest. Both of those sets will be available to VIPs from October 3, before going on wide sale on October 7. No guarantees supplies of 40566 Ray the Castaway will still be available then, though.