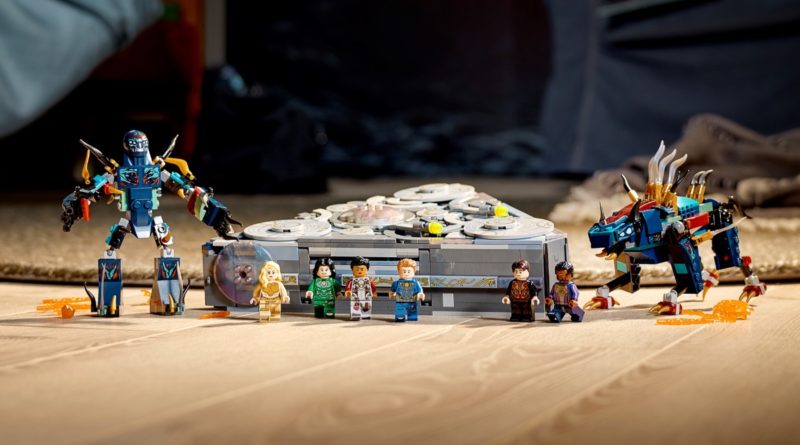 Ahead of their October 1 release, reviews for all four of the upcoming LEGO Marvel Eternals sets are flooding in online.

It’s been a long time coming since the models were first spotted back in December 2020. However, a recent announcement confirming prices and release dates for the four new sets revealed that they are now just around the corner.

LEGO YouTuber Ashnflash has got his hands on the largest of the soon-to-be-released builds, 76156 Rise of the Domo, which includes the Eternals’ triangular ship and the highest number of minifigures from all of the sets. By the sounds of it, the YouTuber is certainly impressed by what he’s seen.

“They are just so unique,” he says. “Some of the prints on these figures are absolutely insane. I can’t wait to take a look at this set, as well as all the others.”

Ashnflash isn’t the only one able to build the latest sets from LEGO Marvel. Fellow YouTuber Solid Brix Studios gives a detailed look at 76155 In Arishem’s Shadow, including close-ups of every one of the minifigures, in his video review.

A third LEGO YouTuber, SwiftBricks, shares two reviews for the price of one, touching on both 76145 Eternals’ Aerial Assault and 76154 Deviant Ambush!, reasoning that they share a lot of similarities. Both models focus on the mysterious, blue-plated Deviant creatures that we’ve caught glimpses of in the trailer for the upcoming film.

“I’m most excited for the Sprite minifigure in these sets,” the YouTuber says, pointing out that 76145 Eternals’ Aerial Assault is the only one to include the smallest minifigure on the Eternals’ team.

All four of these LEGO Marvel Eternals sets will be available to buy from October 1 on LEGO.com, in official stores, and from the usual retailers.