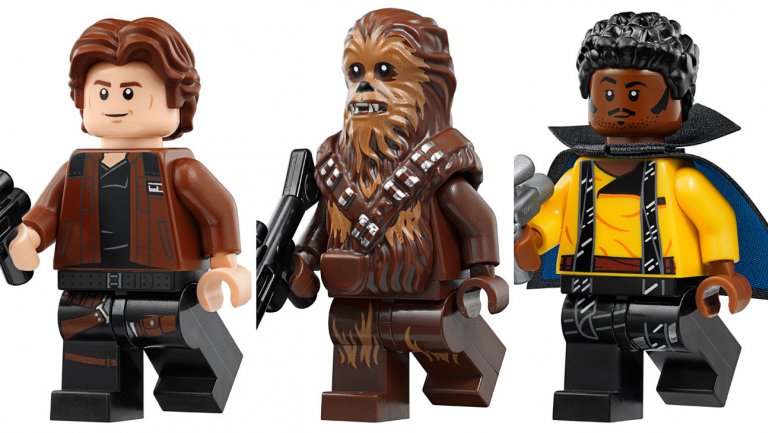 LEGO Star Wars fans can finally get a first look at the new minifigure versions of Han Solo, Chewbacca and Lando Calrissian based on Solo: A Star Wars Story.

As part of the announcement of LEGO Star Wars 75212 Kessel Run Millennium Falcon, five new minifigures from Solo: A Star Wars Story were revealed by the Hollywood Reporter. They all appear in the new Millennium Falcon set, which looks to be the one to get for collectors who want the full core cast in one hit.

Five of the seven minifigures that will be included with 75212 Kessel Run Millennium Falcon have been revealed – Han Solo, Chewbacca, Lando Calrissian, Qi’Ra and  Kessel Droid. Two more will also be part of the set, but are currently being kept under wraps.

Even Chewbacca has had an update, with new double bandoliers, scruffy hairstyle and bulging pocket. Han sports a slightly different smile, perhaps demonstrating that Alden Ehrenreich’s portrayal of the character  will not include imitating Harrison Ford’s trademark lopsided grin. Of the updated minifigures, Lando Calrissian shows the most difference, revealing a significant outfit change for the smooth operator – complete with fancy cape.