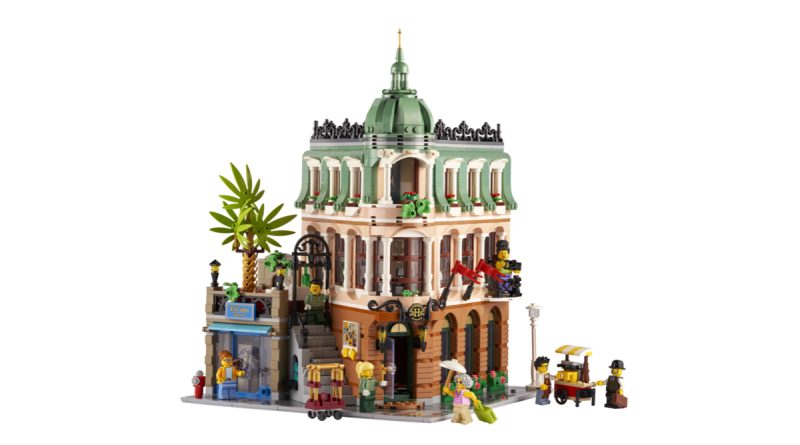 The LEGO Modular Building range is one of the most popular themes, but what could fill the gaps in the current line up?

As sure as night follows day, January sees the release of a new Modular Building. This immensely popular theme has been running since the launch of 10182 Cafe Corner back in 2007 and has 16 or 17 models so far – it depends on whether you view 10190 Market Street as a ‘proper’ Modular. Most people do, these days, since the Assembly Square designer video gave it the LEGO Group seal of approval.

So what might January 2023 bring to the party? We’ve taken a look at the current range, looked for gaps and then canvassed the Brick Fanatics team to see what they’d want for a new Modular. Some suggestions were… optimistic. A University and student halls would be welcome in any LEGO city but the size would probably be prohibitive. And the suggestion of a massage parlour is going to be rejected on any number of grounds, not least taste!

In the existing range, businesses are by far the most prevalent, with a Cafe, a Pet Shop, a Bank and a bookshop as individual sets, while the mighty 10255 Assembly Square adds another handful on its own. Leisure is catered for to some degree, with 10243 Parisian Restaurant and 10260 Downtown Diner offering dining options before maybe spending an evening at 10232 Palace Cinema.

Public services, however, are less well served. A Fire Brigade and Town Hall were early additions to the theme, but we had to wait until 2021 for 10278 Police Station and that’s it for the residents of the city. Definitely some gaps there. With that in mind, here are five Modulars that we’d like to see join the current range.

We’ve had a number of LEGO Store models, often as GWPs or special gifts to celebrate the opening of a new LEGO Brand store. But a LEGO city needs a LEGO store, right? Krisnow certainly thought so, when they submitted their design to the Ideas programme back in 2016. While it reached 10k votes, it didn’t make it through the review. Maybe it’s time has finally come?

The younger residents of a LEGO city need something to do in the evenings and at weekends other than hang out on street corners. Continuing the 50s vibe of the Downtown Diner, a bowling alley might fit in nicely, although with most Modulars having a square footprint, creating a realistic length might be an issue.  User Avilabrick thought they’d come up with a solution with this design a while back.

While there may have been a music shop in Assembly Square, the city is lacking any kind of music venue. However, earlier this year, when 10297 Boutique Hotel was launched, builders spotted a faded notice board attached to a wall. Alongside a torn ad for Ace Brickman, Private Detective, there’s also a poster for Andy Sax who is playing at the Music Hall. Could that be a hint for a future set?

As mentioned previously, there isn’t much for the city’s youth to do, so maybe the LEGO designers could provide an amusement arcade? Arcade machines have already made an appearance in Ninjago City Gardens, so recycling them for a city amusement arcade might be a realistic idea. Indeed, Avilabrick has a modular building including a gaming arcade on Ideas at the moment.

The modular range already has a Fire Station and a Police Station, so the obvious choice is for some kind of medical facility. A hospital might be too much to hope for on a 32 x 32 baseplate, but a doctor’s surgery would fit right in and provide a much needed resource for minifigures who fall ill. Lego designers already have some experience in this area, with the MRI scanner sets that were donated to 600 hospitals, worldwide.

What would you like to see as a new Modular building? Leave a comment below and let us know. Meanwhile, please consider supporting Brick Fanatics by buying your LEGO via our affiliate links. Thanks.