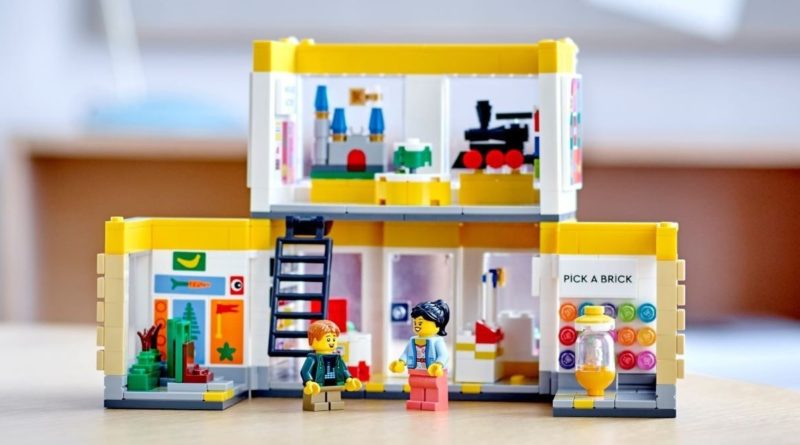 Next month sees the release of a brand-new LEGO Store model, in addition to a similar existing set that will be available as a GWP from the soon-to-reopen Leicester Square location. Whilst 40528 LEGO Brand Retail Store first appeared at the start of this year as a GWP at new store openings, the upcoming 40574 LEGO Brand Store can be purchased by all from August 1.

The 541-piece set is a two-level model that includes a mini-Pick-A-Brick wall, Brick Pit and window display models, plus many nods to familiar past LEGO sets, themes and minifigures. Taking a closer look at 40574 LEGO Brand Store, here are five meta references we’ve spotted so far in the set:

Located on the top floor and displayed in one of the store’s windows is a mini brick-built black train with red wheels. This is most likely based on 40370 Steam Engine, which was released in 2020 and is itself a reissue of the original 7810 Push-Along Steam Engine from 1980.

Although not appearing to match any specific LEGO Castle sets, this micro model does bear a passing resemblance to 71040 The Disney Castle, 70404 King’s Castle and 10176 Classic Castle. Interestingly, the mini build isn’t a recreation of the upcoming 10305 Lion Knights’ Castle.

As displayed in many physical LEGO Stores, the giant red brick is also recreated in micro form in this set. Visitors to LEGO Stores on July 23 and July 30 from 10am to 12pm, then again on August 10 from 11am to 1pm, will be able to pick up their own free Red Brick Build model as part of the ongoing 90th Anniversary celebrations.

Previous models such as 40178 Iconic VIP Set and 40359 LEGO Store Picture Frame included a LEGO Store Employee minifigure. Alas, no such character is included in 40574 LEGO Brand Store, with just minifigures of a mum and young son, who might possibly be visiting the store to pick up the very same set they’re part of. Now that’s meta.