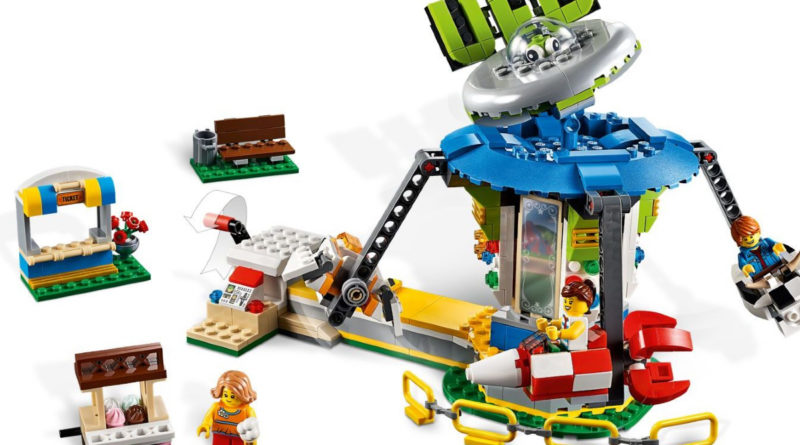 The arrival of 10303 Loop Coaster has got us thinking outside the box when it comes to LEGO amusement parks.

The LEGO Fairground Collection has proven an unexpected delight in the contemporary LEGO lineup. Seven of these sets have appeared so far, with roller coasters, Ferris wheels and even a haunted house gracing store shelves.

However, repetition has quickly set in, with the LEGO Group preferring to riff on existing concepts rather than introduce new ones. That’s a shame for a toy that prides itself on its various possibilities.

With that in mind, we’ve identified five rides we think would benefit from a more extensive LEGO model:

These kinds of rides are extremely popular in real-life amusement parks, offering a thrilling experience without requiring too much courage. They can be found in five of Disney’s amusement parks, while versions also appear in other locales like Alton Towers.

The concept of spinning objects around a central point is one that’s been explored in LEGO before now, via sets like 40416 Ice Skating Rink. It doesn’t seem like a stretch to expand that to a larger LEGO set, and add a greater level of detail to its various components.

This is actually an idea the LEGO Group have explored before now. However, it may not have been in a way that had mass appeal. A haunted galleon can be explored in 41375 Heartlake City Amusement Pier, although the large quantities of pink and yellow may have compromised its fear factor.

The track pieces introduced in sets like 70922 The Joker Manor have been put to excellent use, as 10303 Loop Coaster makes obvious. From that perspective, creating a spookier ghost train seems eminently possible. Themes such as Hidden Side have shown us how to create a suitably ghoulish environment in LEGO form.

This is another ride that the LEGO Group has modelled, in sets such as 5006746 Swing Ship Ride. However, that was a very small promotional item – so small, in fact, that it couldn’t hope to accommodate minifigures. A larger model is clearly in order.

The LEGO Group has a rich history of extravagant and highly desirable ships, with the likes of 10210 Imperial Flagship commanding astronomical prices on the secondary market. From that perspective, it’s not to imagine what a model of this ilk could look like. Of course, the swinging mechanism of the ship probably presents significant technical challenges – which might necessitate some major design compromises.

This ride operates on a similar principle to a carousel, in the sense that it has people riding small cars in a circle. The difference is that the cars are suspended from chains, which centrifugal force cause to fly outwards. 31095 Fairground Carousel explores this basic idea, although it uses Technic beams instead of chains.

A similar, large-scale model in LEGO form would certainly add some welcome visual interest to any LEGO fairground layout. However, like the swinging ship it may be tricky to create a stable LEGO model with the appropriate features.

Alternatively, why don’t we keep it simple for the next one? The hayride is pretty much what it sounds like; people riding in a cart filled with hay, which is – in turn – pulled by a tractor or horses. The ride is a traditional celebration within farming environments, which the LEGO Group has recently returned to.

40423 Halloween Hayride explored this rich tradition back in 2020, but actually riding in the cart was a little tricky. A larger model (with a more detailed tractor and cart) would solve this problem easily, and also allow for some summer or spooky theming as desired.

Until any of these grace our presence, we’ll have to make do with the (admittedly impressive) 10303 Loop Coaster instead. You can also pick up 10273 Haunted House and 31119 Ferris Wheel if you’re looking to start a fairground – or expand upon an existing one.