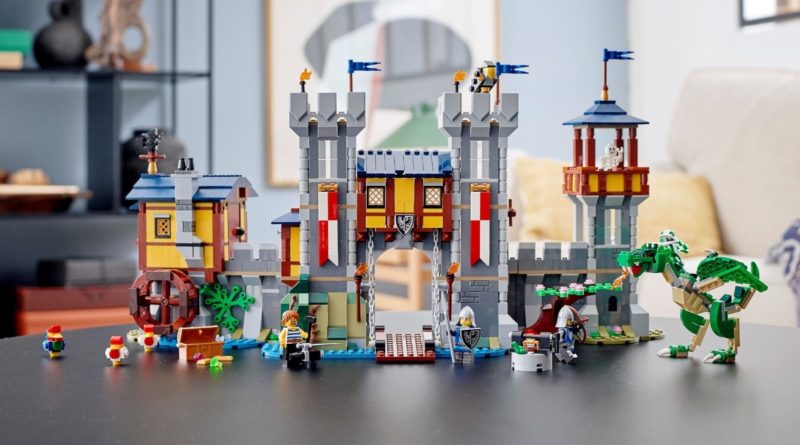 With rumours suggesting that 2022 will see LEGO Creator 3-in-1 bring back Vikings, here are five more retro themes we’d love to see resurrected.

LEGO Ideas Design Manager Sam Johnson told Brick Fanatics earlier this year that the Creator 3-in-1 theme is the ‘new home of retro themes’, which we’ve already seen in 31109 Pirate Ship and 31120 Medieval Castle. The LEGO Group is now apparently diving into more recent brick history with the rumoured 31132 Viking Ship, which is said to be arriving next summer.

While Castle and Pirates have been around since the ‘70s and ‘80s respectively, Vikings originally launched in 2005 with five sets, bringing together boats, ships, fortresses, catapults and brick-built beasts, including the Midgard Serpent and Fafnir Dragon. If it is indeed making a comeback under the Creator 3-in-1 banner next year, it looks like the pool of ‘retro themes’ is deeper than first expected.

With that in mind, here are five more strong contenders for classic lines due some sort of comeback in the modern era. That’s your Creator 3-in-1 flagship set sorted through 2027, TLG…

The legacy of this anime-inspired theme can still be keenly felt in modern themes including NINJAGO and – to an extent – Super Heroes, thanks to the medley of mechs the Marvel line pumps out on the regular. But that original flavour of Exo-Force and its uniquely-designed minifigures, light bricks and fibre-optic cables, and towering mecha is still sorely-missed, and could make for a brilliant trio of models in a single box.

Adventurers already had one spiritual successor in 2011’s Pharaoh’s Quest, while its hero Johnny Thunder popped up in The LEGO Movie in 2014. The LEGO Group is clearly cognisant of the love for its classic theme, then, but we’d still love to see it given a proper comeback under Creator 3-in-1. It would be near-impossible to pull off given the range of colours required, but imagine a single set that could be rebuilt into any one of Adventurers’ three biggest subthemes: Egypt, Jungle or Dino Island.

The LEGO Group seems hesitant to touch Western in 2021, presumably for its iffy portrayal of Native American cultures – but there are ways to do Western tactfully and respectfully. A reimagining of the classic Fort Legoredo that focuses entirely on cowboys and pioneers could work, for instance, and would technically be a nod to the split of the original theme’s two waves between those factions and Native Americans. A tricky one to get right, for sure – but not out of the question altogether.

Another theme that’s seen a mini-resurgence of sorts, this time through 2009’s Power Miners, Rock Raiders didn’t do much to shake up the LEGO portfolio in the late ‘90s. Full of huge, single-use parts and gimmicky functions, its sets haven’t aged particularly well – but it still has a dedicated following online, driven partly by nostalgia and partly by its tie-in video game. Plus, Creator 3-in-1’s focus on building big with basic elements could be just the ticket to resurrecting Rock Raiders with closer ties to the core LEGO ethos.

As one of the ‘big three’ original play themes next to Castle and Pirates, Space is almost too obvious a contender for a Creator 3-in-1 comeback at this point. We’ve seen it in small doses in 31107 Space Rover Explorer and 31115 Space Mining Mech, but something closer to 70816 Benny’s Spaceship, Spaceship, SPACESHIP! would probably do more for the adult fans who hold up Classic Space as the pinnacle of LEGO design. Really, the biggest surprise in Vikings coming back in 2022 is that it’s happening before Classic Space…