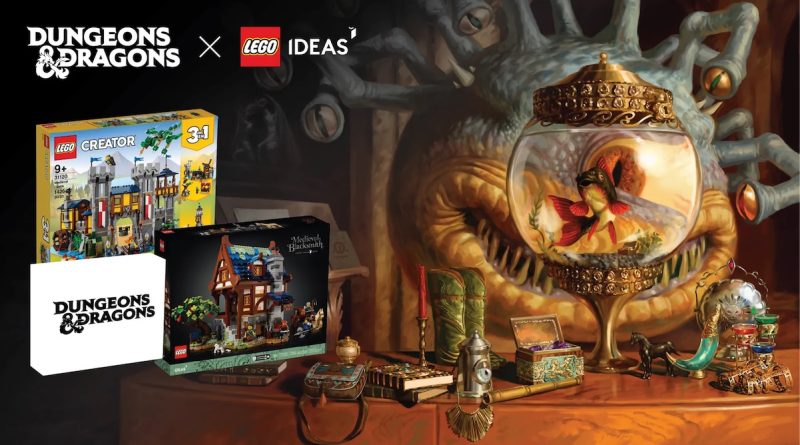 LEGO Ideas’ Dungeons & Dragons set probably won’t be out for a while, but there are other ways to represent a fantasy world in LEGO in the meantime.

At the time of writing, that puts it a maximum of two years away so there may be a long wait for those hoping to start a LEGO Dungeons & Dragons collection sooner. However, currently-available builds offer an alternative or a way to kickstart a larger display in the meantime. Some of these are even being offered as prizes in the challenge.

Every good fantasy world needs an impressive castle and though 10306 Lion Knights’ Castle may be more medieval than fantastical, it should act as a good base for a diverse kingdom’s central fortress.

Retiring before Dungeons & Dragons’ 50th anniversary, 21325 Medieval Blacksmith is worth picking up for a Dungeons & Dragons display thanks to its rustic design. For archers and blacksmiths, it’s a good source of minifigure parts too.

With dragon in the name of the game, there had to be at least one LEGO dragon set on this list. 76406 Hungarian Horntail Dragon is diverse as thanks to its base, it’s detailed enough to be used in a LEGO Dungeons & Dragons display but also stable enough to be used as a miniature in-game. Its base is just a bit bigger than a gargantuan miniature base too, perfect for an ancient dragon.

31109 Pirate Ship could be used for a LEGO Dungeons & Dragons display too as a typical campaign doesn’t just have to span castle and dungeons, but the open ocean and pirate ships too. As long as that fits your character and would, 31109 Pirate Ship is your best bet for a LEGO Pirates set currently.