While there are already many The LEGO Movie 2: The Second Part sets available, there is plenty more material in the film for the LEGO design team to mine for inspiration

The LEGO Movie 2: The Second Part has finally arrived in UK cinemas, after a merchandising fanfare that has probably left most fans’ bank accounts needing a period of rehabilitation. Whether the movie has become stuck inside your head or not, it is another visual treat for LEGO fans with a huge amount of detail packed into every frame.

Even though most of the main vehicles and locations have already been released as LEGO sets, here are another five scenes that would be worth adding to an already impressive line-up…

Spoiler warning: the following contains spoilers for The LEGO Movie 2: The Second Part.

If inventing a double-decker couch wasn’t weird enough, Emmet outdoes himself by adding one more layer to create an even more ludicrous sofa. It’s a couch with a difference though, as it can transform into a fully-armed mech. As a LEGO set, a convertible version would not be possible but a 2-in-1 model could re-create it. Taking inspiration from 70818 Double-Decker Couch, a lot of key characters could be included, particularly Emmet, Lucy and some of the tough Apocalypseburg residents.

Lying at the heart of the Systar System is Queen Watevra Wa’Nabi’s resplendent palace that just screams classic sci-fi with its stark white colour scheme, along with its clean lines and angles. A set of the entire castle wouldn’t be achievable as it hangs in space much like a chandelier, however re-creating the central spire with its impressive sail would be a fair compromise. Inside, the designers would have to include the Queen’s throne room with its many windows and the floating podiums for her numerous attendants.

Following in the comedic footsteps of The LEGO Movie, the sequel has just as many hero cameos and fun jests towards Marvel and other licenses. One of the best is when Rex and Emmet discover a brainwashed Superman flying around mowing his lawn and having changed his name to “Sillyman”. A little set based on this scene would have to include Superman’s house and part of the street with its many lampposts. Unique glitter variants of the entire Justice League team could be included, along with Superman’s new neighbour – a friendly Lex Luther.

Hidden beneath a pyramid shaped temple built by Fabuland characters is the Wedding Cake of Doom, where Batman and Queen Watevra are to be married. Only the final few tiers of the cake could be made as it is another scene a bit too big for a single LEGO set. Lots of pink pieces would be needed for the sponge, with white slopes and curves for the icing. Plenty of unique minifigures could be included, such as Bridegroom Batman in his white, furry cape, along with some of the crowd such as Fox Suit Girl. 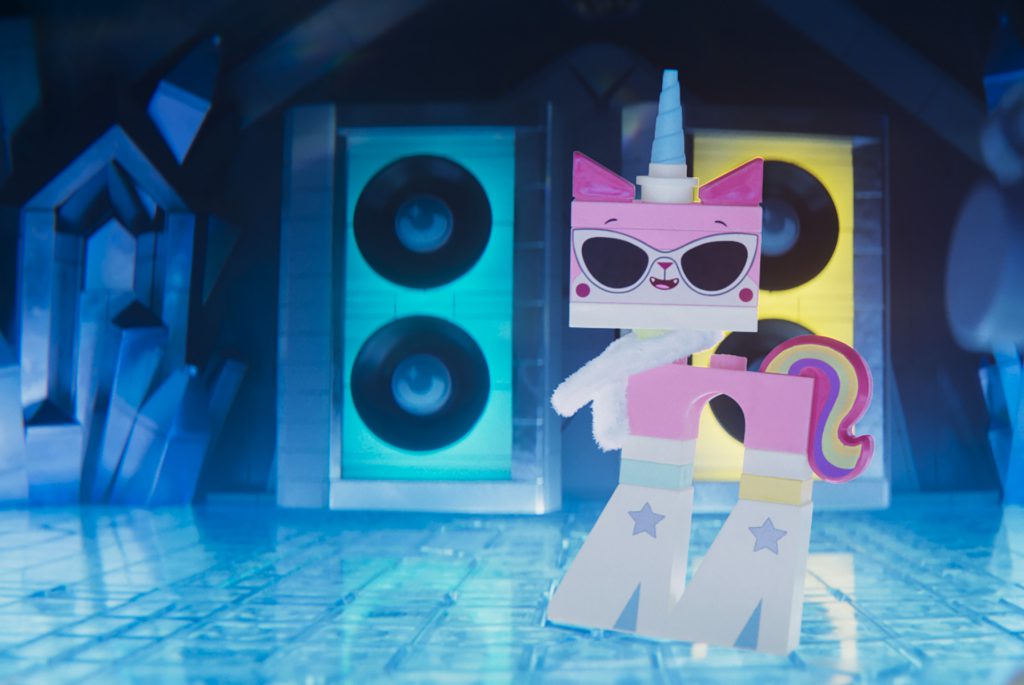 During the dramatic finale of the film, Emmet and his friends have to fight off the Raptor piloted spaceships under the command of Rex Dangervest. Unikitty undergoes another personal transformation into a cat-with-wings spaceship (Spacekatty?) in her usual pink, white and blue colouring. A set featuring this variation of Unikitty should be easy for the LEGO designers after 70827 Ultrakatty and Warrior Lucy!, and would need to incorporate her glittery hairball missiles as a fun play feature. For some conflict in a box, the set could be a double-pack and also include one of the enemy dino crafts.

The summer wave of LEGO sets is promising to include a few more based on The LEGO Movie 2: The Second Part, but the film is so packed with diverse visual treats that there are a plethora of potential future releases. Let’s hope the creatives in Billund are at work on more film inspired delights.