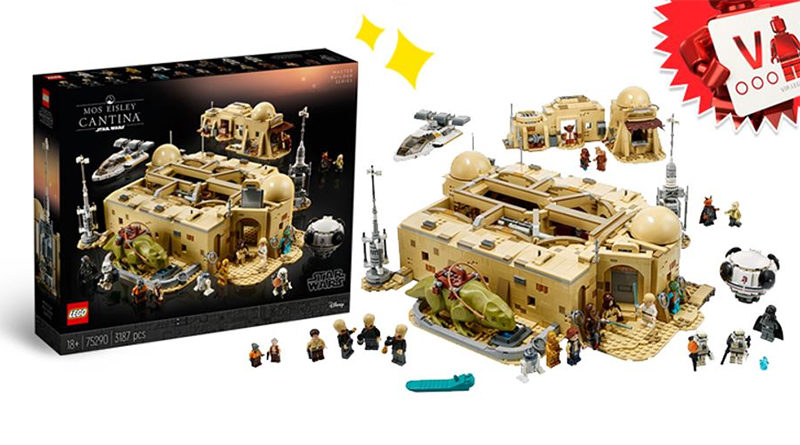 LEGO Star Wars 75290 Mos Eisley Cantina is on the way, and ahead of the set’s release, Brick Fanatics takes a look at everything we know so far

It will be soon be time to take a trip to a wretched hive of scum and villainy. Known to be a little rough, Chalmun’s Cantina will be joining the LEGO Star Wars line-up like never before as 75290 Mos Eisley Cantina, the largest release of the location in the theme yet.

75290 Mos Eisley Cantina will arrive on September 16 at LEGO.com, with the set likely to be a shared exclusive between the website and physical LEGO Stores.

There are at least 19 minifigures in the set – 20 if R2-D2 is counted as a minifigure – as far as the images released so far reveal. That’s quite the count and should make the cantina the hustling and bustling place it is in A New Hope, rather than the deserted drinking hole seen in The Mandalorian.

As well as the familiar characters – Luke Skywalker, Han Solo, Chewbacca, Obi-Wan Kenobi, C-3PO and R2-D2, the set includes some of the more obscure characters such as Wuher, Greedo and three members of the Modal Nodes. There are several never-before-seen characters in the line-up, with some using brand new head moulds. Based on the images available so far, Dr Evazan, Ponda Baba, Garindan, Momaw Nadon, Elis Helrot, Kabe, a Jawa and two Sandtroopers will also be in the box.

Like 75222 Betrayal at Cloud City, 75290 Mos Eisley Cantina has been given the Master Builder Series moniker. That basically means it’s a typical LEGO minifigure playset, but much bigger, and not an Ultimate Collector Series – those tend to be more display focused and larger than minifigure scale. It’s also an 18+ set.