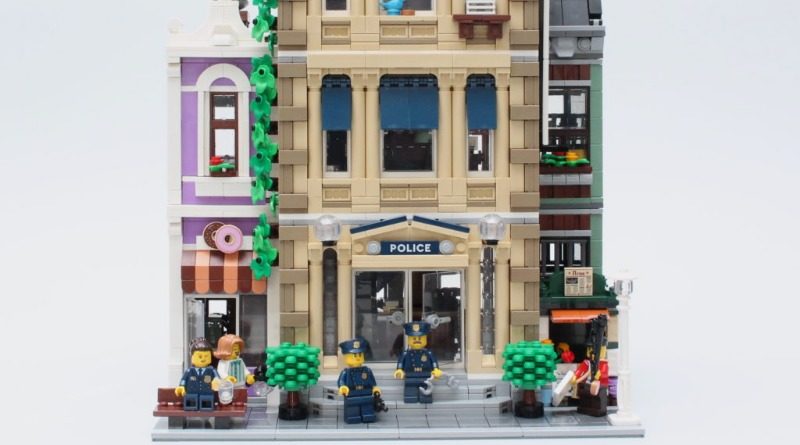 10278 Police Station has finally arrived – but is it worth your time, money and attention? Brick Fanatics lists five things you need to know about the latest LEGO modular building before diving in.

It feels like an age since the LEGO Group lifted the lid on 10278 Police Station, but it’s now finally available to order at LEGO.com. You can check out our full review of the seriously impressive addition to the Modular Buildings Collection here, but if you don’t have time to read the entire thing, we’ve boiled it down to the essentials. Here’s everything you need to know about this astonishing architectural achievement.

Police stations and LEGO bricks are natural bedfellows, but plastic law enforcement has traditionally been the realm of LEGO CITY. The citizens of the Modular Buildings Collection, meanwhile, have had to make do with hiring private detectives to crack down on money launderers or solve biscuit-related mysteries. 10278 Police Station therefore offers a more legitimate, government-sanctioned means of catching crooks for the detailed range of adult-targeted buildings. It’s not afraid to indulge in a little comic stereotyping, though, tacking on a brightly-coloured doughnut shop.

Just like 10246 Detective’s Office and 10251 Brick Bank before it, 10278 Police Station manages to weave a narrative through its architecture and minifigures. Instead of a cookie smuggler or money launderer, though, 2021’s modular building involves a crooked newspaper kiosk proprietor, who’s trying to drum up business by lifting doughnuts from the cake shop. The printed ‘DONUT THIEF STILL HUNGRY’ newspaper tiles are a treat, even if the idea of LEGO larceny literally next door to a police station does require a little suspension of disbelief.

3 – You’ll learn a lot from its techniques

Have you ever thought about stacking splat gears to create bushes? How about using trans-clear minifigure posing stands to attach shelves to walls? Or even, perhaps, flipping a very specific Minecraft element upside down to use for architectural detailing? 10278 Police Station will introduce you to all these concepts and plenty more, across a build that’s both entertaining and educational in equal measure. You’ll need to build it for yourself to discover all its secrets, but here’s five to get you going.

From the hidden tunnel beneath the jail cell to the billboard that hangs on the side of the building, there are plenty of fun touches to discover in the build – and several of them even nod back to previous entries in the Modular Buildings Collection, tying together your entire street in a single, cohesive display. Speaking of which…

1 – It looks great next to other modular buildings

You won’t have any trouble slotting 10278 Police Station into your modular street, because its unique visual identity means it at once sits perfectly next to previous buildings, while also providing the distinction that’s key to stopping things getting samey. The doughnut shop’s vibrant lavender colour scheme does a lot of heavy lifting in that regard, but the police station’s height also helps it stand apart from recent diminutive releases.

10278 Police Station is available now at LEGO.com. If you want to know more about the set, you can read our in-depth review here. Plus, don’t forget to check out five of its best techniques, how it stacks up next to its fellow buildings, and the five largest modular buildings to date.