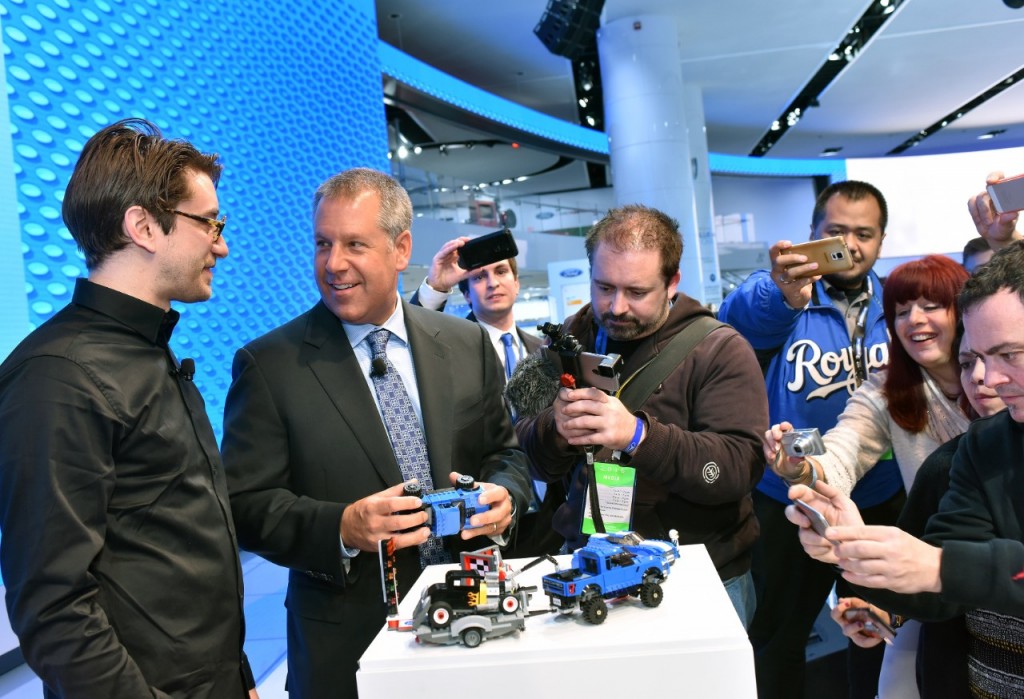 Befriending someone who enjoys turning wrenches will lead to some interesting conversations. During that “get to know you phase,” one of the questions you will likely find yourself asking is “So what got you into cars?” Most of the time you will hear words like “Hot Wheels,” “Micro Machines,” or “Big Wheels,” with all of them serving as a huge influence: All three of those toys are the kind of wholesome fun that do foster brilliant automotive minds. But every now and then, someone will say that playing with LEGO kits as a small child inspired them to build bigger when they grew up, or at least Ford is hoping they will.

On the eve of the Detroit Auto Show, Ford and LEGO announced they were joing forces in a partnership that makes two of the automaker’s most iconic modern vehicles from the 2016 North American International Auto Show far more affordable and easy to parallel park. Unleashing both the new Mustang and the redesigned F-150 Raptor onto toy shelves across America later this year, LEGO and Ford say that this collaboration is a multifaceted move designed to celebrate iconic Ford vehicles, offer fresh LEGO ingenuity, and market both brands on a broader scale. Plus, for some strange reason we get the feeling that kids won’t be the only ones pining for these cool sets.

Both kits are reportedly slated for release nationwide on March 1 in both LEGO stores and Toys “R” Us locations, and outside of all the little LEGO Maniacs anxiously waiting in line, we’re sure that a few Raptor and Mustang enthusiasts will be making some purchases that week as well. Designed to appease the kid in all of us, Ford says that by working with LEGO Speed Champions it is able to “bring the excitement of the racetrack to people’s living rooms with the first-ever Mustang and F-150 Raptor LEGO sets.”

Designed as an affordable beginner kit, the 185-piece Mustang set come complete with a time board, torque wrench, and fully helmeted race driver. LEGO’s second offering is a bit more complex: A 664-piece set which includes the 4×4 Raptor truck, a trailer, an illuminated drag racing Christmas tree, a Model A hot rod with all the proper trimmings, plus a paddock filled with every tool required to keep the race in full swing.

“The LEGO Group is one of the world’s top toy companies, and is loved by children and adults around the globe,” says Joe Hinrichs, Ford president of The Americas. “Many of us grew up playing with LEGO, so this is a dream project for all of us – including our engineers.”

The Denmark-based LEGO team supposedly worked very closely with Ford’s licensing and design teams on the project, with both development and product design remaining a collaborative priority in order to make the miniature versions of the vehicles look as authentic as possible. Everything from the positioning of lights and the slope of the fender flares to the packaging and marketing materials were analyzed repeatedly before getting a green light, all in hopes of offering enthusiasts both young and old the most authentic toys possible.

Designed and engineered to be just as functional as they are entertaining, LEGO sets have long been a reason for the inspiration behind today’s young engineers, auto enthusiasts, and artists, so seeing Ford getting in on the action is an interesting swing at marketing that you typically wouldn’t consider. Sure, it is by no means a massive ad campaign, but this endeavor really could be a win-win situation for all parties involved, and here is why.

With a suggested retail price of $14.99 for the Mustang set and $49.99 for the F-150 Raptor kit, these are by no means the most expensive LEGO options on the shelf. So chances are quite good that both collaboration pieces will sell well. Secondly, the proper branding and packaging of these kits is a far more influential marketing ploy than you might think; kids who love these kits will likely grow up remembering that Ford Raptor LEGO set, and how it inspired them to one day own the big-boy version. Then you have the enthusiasts. Guys who own Mustangs and/or Raptors, who want something cool to show-off on a shelf in their garage or man cave to prove that you can never be too young to have fun. Then, with a little luck, someday their offspring will be allowed to play with said LEGO sets, completing the cycle and inspiring the next round of Ford enthusiast.

If all goes well with the preliminary duo of trial sets, there is a solid chance that more brand specific kits will roll out with vehicles like the new GT likely making the cut. Then maybe, with a little bit of luck, we will one day see some larger kits from Ford, similar to the Porsche 911 GT Finish Line kit.

“We are excited about the new LEGO Speed Champions sets based on iconic Ford vehicles,” says Jill Wilfert, vice president of licensing and entertainment for The LEGO Group. “Each LEGO Ford car tells a story and has infinite play possibilities. With these new sets, kids can play out their ultimate car fantasies. They are able to role play and become the LEGO mini-figure, stepping into the greatest cars on earth.”