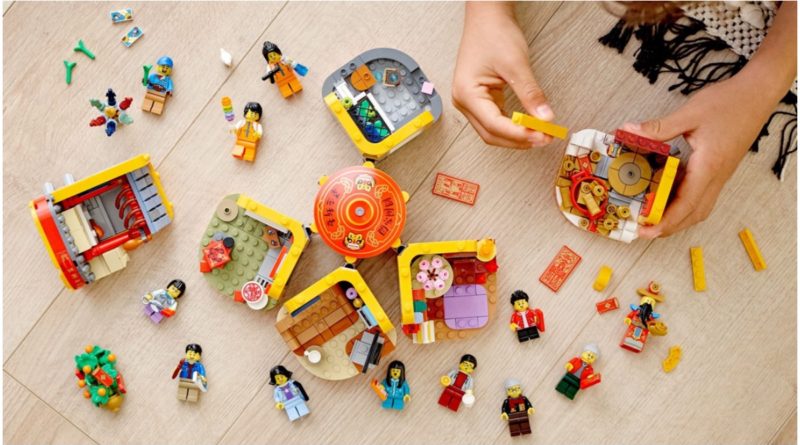 2022’s Chinese New Year sets have been announced, and we’ve spotted a number of exciting features in these unusual LEGO models.

Over the last few years, the LEGO Group has produced models inspired by Chinese New Year celebrations. Their intricate, colourful builds and unique subject matter have won them legions of fans, and ensure they don’t stick around on store shelves for long.

80108 Lunar New Year Traditions and 80109 Lunar New Year Ice Festival are new for 2022, shifting up the subject matter and form factor a little. We’ve spotted some features sure to whet the appetite of LEGO fans.

Coinage in LEGO form is represented by either bespoke pieces or gold-coloured generic ones. These new printed tiles elegantly straddle those two ideas.

The tiles appear to represent cash, a type of coin first used in the fourth century. The square hole and additional details resemble real-world examples, making these highly desirable to LEGO collectors. Four can be seen in the above image, though a spare piece will hopefully be included as well.

Ice rinks have naturally appeared in LEGO form before now, but relied on large quantities of small 2×2 translucent tiles. This solution is a little more elegant, and may make the model an attractive parts pack. It may also inform the design of other LEGO ice rinks going forward.

2 – A LEGO god of prosperity

The LEGO Group has portrayed generic deities from time to time, such as the Battle Goddess Collectible Minifigure. However, the deity in 80108 Lunar New Year Traditions draws more explicitly from real life. Caishen is a mythological figure worshipped in China. His name is frequently evoked during Chinese New Year, and he wields a tool that can turn stone and iron into gold.

The LEGO version is appropriately depicted behind a large pile of golden objects. It follows sets like 80024 The Legendary Flower Fruit Mountain, which take a deep dive into Chinese mythology. However, the gold pieces may be less desirable to LEGO fans than the red pot containing them; this appears to be a new colour for a rather rare element.

The minifigures of the ice festival can commemorate the day with a photo cut-out board. This allows them to pose as one of two cartoon characters, and offers an interesting play feature for the broader model.

Instead of a sticker on a clear element (or something similarly inelegant) this appears to be a new, plastic component that slots into a large subassembly. It’s unlikely that this element will see use outside of this set, given how specific the subject matter is. However, it’s still a great idea, and may inspire similar features or innovations in other models. Items of this ilk appear at other festivals around the world; could one appear in a new fairground set in the future?

If you’d like to pick up either of these sets, they will be released on December 26 in Europe. American LEGO fans must wait a little longer; the sets will release in North America on January 10 instead.