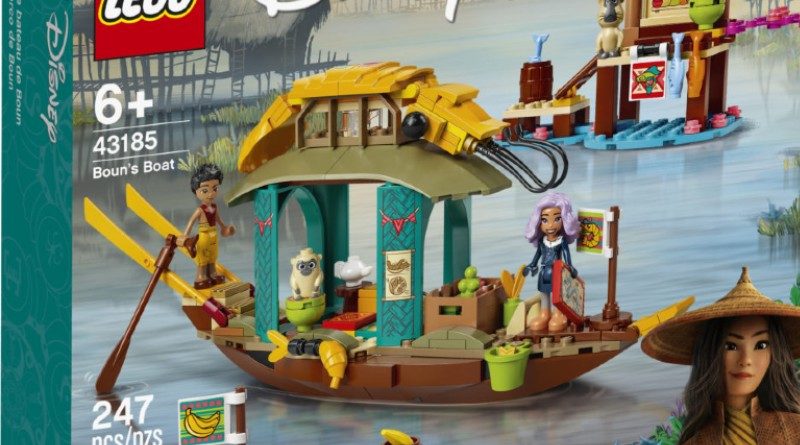 Journey to the fantasy kingdom of Kumandra with an early look at a LEGO Raya and the Last Dragon set, 43185 Boun’s Boat.

The LEGO Raya and the Last Dragon sets are due to launch March 1 but it appears some stores are putting stock out early as one YouTuber has found the full range of sets at a Meijer store, bringing a full review of 43185 Boun’s Boat.

JBBrickFanatic is the one who found the set early and has granted those eager to learn more about this original Disney animated movie whatever details there are to find in the LEGO sets. This particular model includes Mini-Dolls of Boun and the human version of the Sisu Dragon, both exclusive to this set. Also exclusive to this set are two of the three new Ongi pieces, a species of monkey-like creatures that populate Raya’s world.

The builds for the set consist of Boun’s boat, with a large shrimp decorating sitting on top, a small canoe for one of the Ongis to ride and a dock with a market stall. A printed tile of a map of Kumadra is also included, with an intricate river-filled design that forms the shape of a dragon. If you’re not a fan of stickers, you might not be pleased to hear that the canoe requires a sticker across the pointed arch of its shape, a potentially difficult placement for even the most experienced of builders.

The Raya and the Last Dragon sets are due to launch March 1 ahead of the animated movie’s release on Disney+ on March 5. You can check out a first look at the other two models here and here. 43185 Boun’s Boat includes 247 pieces for $49.99.