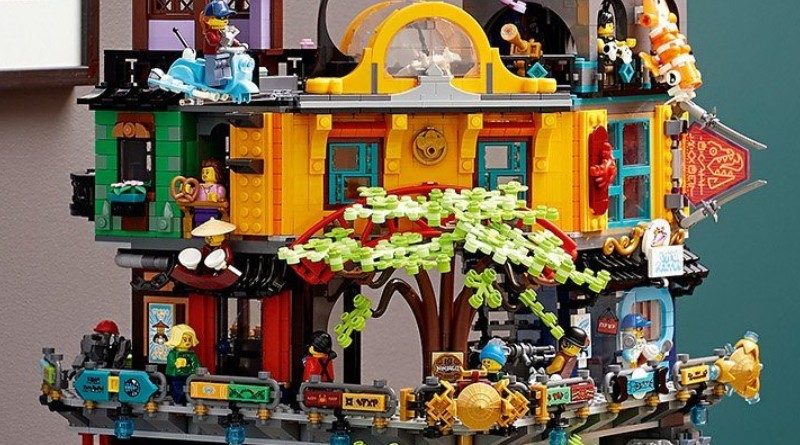 Reviews of the new LEGO 71741 NINJAGO City Gardens are starting to appear, giving fans a closer look at the anniversary set.

The set, which is now in the hands of some LEGO fans after releasing in VIP early access, released to celebrate the 10th anniversary of LEGO NINJAGO, with references to seasons and sets from across the theme’s history.

Ashnflash provides a very close look at the set, analysing the model in individual parts. From the review, fans anticipating their own copy of the model can get a first look at the building techniques, Easter eggs and more.

Before diving into the set, Ashnflash mentions that the 5,685 piece count makes it the largest NINJAGO set as well as the fourth largest LEGO set of all time.

Fans who are struggling on where to fit the shrine island into their layout can get an idea of what the addition might look like on the other side of the model, as Ashnflash places the comparatively short section next to the tallest part of the expansion, unsurprisingly noting a size difference.

The rear of the model is also highlighted in the review, starting from the bottom with the most natural area of any of the NINJAGO City expansions. An island with a bonsai tree is located in the middle of the water, making a nice pairing alongside the shrine island.

Climbing up the model, Ashnflash points out a few more interesting details such as the fallen Ice cream at the back of the Ice Planet shop, perhaps an employee was sneaking some free samples.

NINJAGO fans are sure to get a kick out of watching the review with references to past sets, scenes from the TV show and even a real-life promotion. 71741 NINJAGO City Gardens is available now on VIP early access for £274.99 / $299.99 / €299.99, and fans can score a free 40416 Ice Skating Rink set with it until the end of the month, or while stocks last.