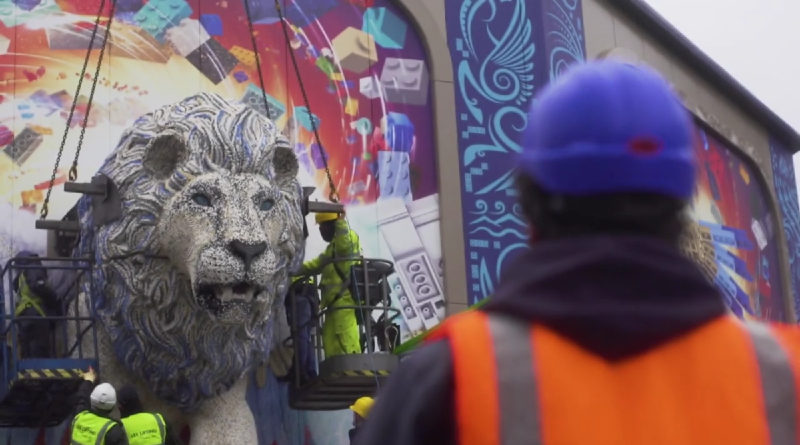 If you can’t wait for the opening of MYTHICA at LEGOLAND Windsor, then this new behind-the-scenes video might just be able to tide you over.

LEGOLAND Windsor has celebrated the 25th anniversary of the park by sharing a new look from behind the curtain at MYTHICA, giving a sneak peek at the installation of Maximus the Sky Lion.

The video was uploaded to the resort’s YouTube channel and features facts and figures for the model as well as a quick look at the rest of the new expansion.

Maximus the Sky Lion comes in at over 685,000 LEGO bricks and with the help of some cranes, has now been installed on the Flight of the Sky Lion attraction, which will be the UK’s first flying theatre.

The outside of the building definitely resembles what was shared in the full reveal of the land, but now the intricate designs on the attraction can be seen. Most interestingly, the first few seconds of the video flashes over a few other areas of the land, including the two drop towers, play area and entrance arch.

LEGOLAND Windsor is currently set to reopen on April 12, or as government guidelines allow, and the new MYHTICA expansion is planned to open to guests on May 29. You can read up on everything coming to MYTHICA here, and the team at LEGOLAND Windsor is also offering you the chance to get involved with the 25th-anniversary celebrations.