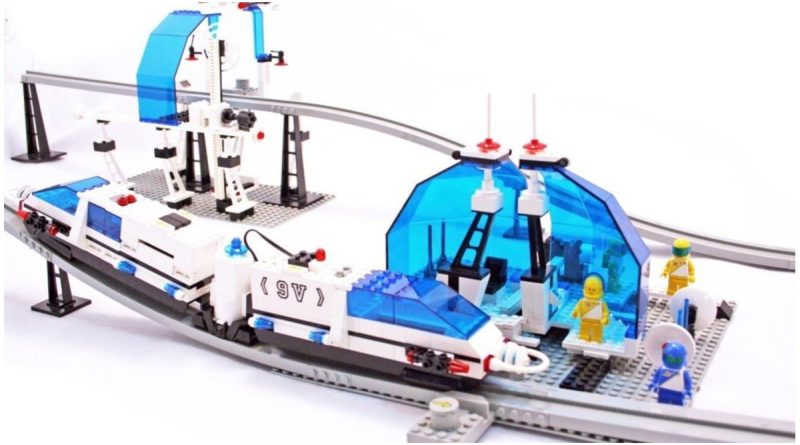 In the LEGO ‘Adults Welcome’ ads, we couldn’t help but notice something unusual yet strangely familiar in the background.

Marie has popped up in a few LEGO adverts now. She’s a stylish lady but her day doesn’t always go quite to plan. Her ‘flow’ isn’t… flowing. Maybe it’s because of the strange, robotic voiceover in the background. Whatever the cause, once she sits down with a LEGO set and starts to build, then everything is calm once more.  Her flow is restored. In the latest short that’s been popping up on Instagram, it’s 21058 The Great Pyramid of Giza that saves the day.

Elsewhere, Bryce and Nabil are having similarly frustrating days. Indeed we took a look at them being stalked by RoboVoiceoverMan last year. While they all have different issues, they all seem to have one thing in common. Wherever it is they live – some kind of 1960s vision of the future – the main form of transport seems to be a suspended railway. It’s always there, just glimpsed in the background.

Now we’re not ones to speculate wildly without a shred of evidence, but we do know that when LEGO advertise, or create a designer video, there’s very little that happens without there being a very good reason for it. Over the years there have been easter eggs aplenty that only came to light with a set reveal some months on. In the ads, we see any number of 18+ sets referenced, including 31203 World Map and 10280 Flower Bouquet. So that railway…

There’s no doubt that the original LEGO Monorail from the late 80s and early 90s was a theme beloved of many, and the clamouring for its return has never really gone away. So is this railway just there to be a bit of background colour, or could there be more to it?

First thing to say is that the train in the videos is not a monorail as LEGO fans would understand it. Looking back at the original system, that appeared in such sets as 6990 Monorail Transport System and 6399 Airport Shuttle, the train sits on a track and is driven, as the name suggests, by a single central wheel, as opposed to two driven wheels on a conventional train.

In the videos, the train hangs below the track, a configuration often referred to as a suspended railway, although some, such as the Wuppertal Schwebebahn in Germany, are still referred to as monorail systems. While it may not be the futuristic space transport from 30 years ago, could it be a subtle hint that the designers at LEGO have been tinkering away on a secret project?

At the moment this is nothing more than wishful thinking, but like we say, that train isn’t in those adverts by accident, so who knows? We’re keeping our fingers crossed though, just in case.

You can support Brick Fanatics by purchasing your LEGO sets via our affiliate links. Thanks.

2 thoughts on “Has LEGO just teased an update to the classic monorail?”