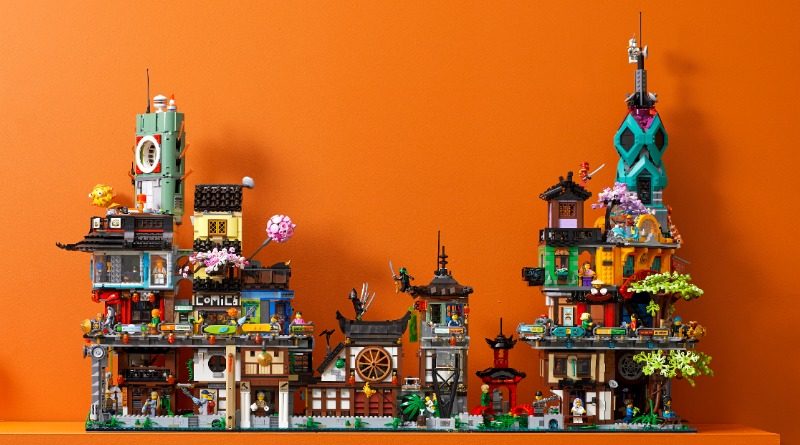 Both previous – and now long-retired – sets were released under the LEGO NINJAGO Movie banner, while the newest addition is part of the NINJAGO Legacy range, and ties into the long-running TV show. That doesn’t mean they’re not compatible, though – in either format or aesthetics.

In fact, the three-tier structure of 71741 NINJAGO City Gardens closely matches that of 70620 NINJAGO City, right down to the balcony that runs around its middle level. It’s odd, then, that the LEGO Group’s official images haven’t placed those two sets side-by-side, instead popping 70657 NINJAGO City Docks between them.

There’s a pretty simple explanation, however: this is clearly the only way they’ll all sit side-by-side on your shelf, for one long, horizontal cityscape. Both 71741 NINJAGO City Gardens and 70620 NINJAGO City are ‘corner buildings’, so placing them adjacent to each other will create a closed block, forcing you to place 70657 NINJAGO City Docks behind one of them in an ‘L’ shape.

That’s fine for fans with a larger layout space, but those hoping to comfortably display all three sets on a single shelf may not be totally satisfied. We won’t know exactly how easy it is to arrange all three sets – or how they look in configurations other than the one in the official images – until we have a copy of 71741 NINJAGO City Gardens in hand. From where we’re sitting now, though, the prospect of two corner buildings doesn’t seem very flexible.

For more on 71741 NINJAGO City Gardens – including its price and release date – click here. If you’re just after more images of the set, meanwhile, you can check out our full gallery here. Nine NINJAGO Legacy sets have already launched at LEGO.com, while another two will arrive in June.