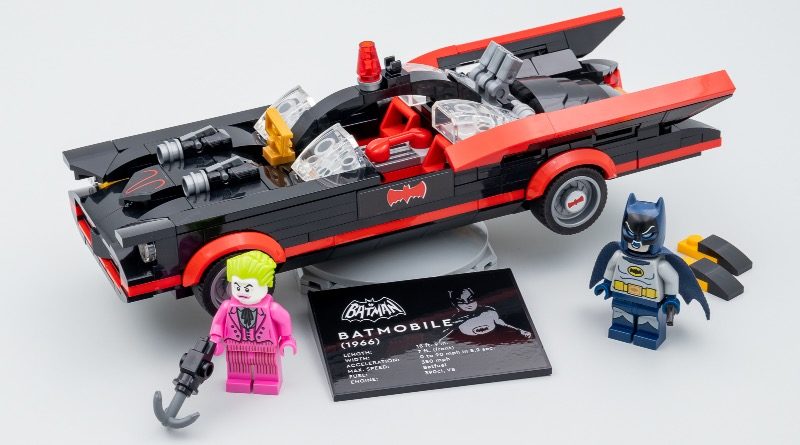 The first reviews of 76188 Batman Classic TV Series Batmobile are starting to land online, and it looks like this just might be the best LEGO 1966 Batmobile yet.

Hoth Bricks has published an early review of one of two Batman sets due to launch later this month, marking the first major DC releases of 2021 (beyond January’s accessory pack 40453 Batman vs. The Penguin & Harley Quinn).

The French LEGO Fan Media’s gallery gives us a great look at how 76188 Batman Classic TV Series Batmobile comes together, complete with its rotating display base and stickered plaque, and its two minifigures, Batman and the Joker.

Both the Dark Knight and his arch-nemesis are styled on their appearances in the classic 1960s Batman TV series (the clue’s in the name), as portrayed by Adam West and Cesar Romero. Just like the Caped Crusader’s ride, the designs of both minifigures differ slightly from the previous versions seen in 76052 Batman Classic TV Series Batcave.

In fact, Brickset’s review includes a handy trio of comparison shots between the first and latest 1966 Batmobiles, Batmen and Jokers, which you can check out below. While the minifigures might not be quite as cool as the originals (where’s Batman’s dual-moulded legs?), the Batmobile itself looks much improved over its 2016 predecessor.

You’ll need to part with £34.99 / $29.99 / €29.99 to pick up the 345-piece 76188 Batman Classic TV Series Batmobile when it launches at LEGO.com and in LEGO Stores on April 26, alongside a bumper crop of new sets across Star Wars, Marvel, Minions and more. Click here for the full list, which also includes another Bat-vehicle in 76180 Batman vs. The Joker: Batmobile Chase.