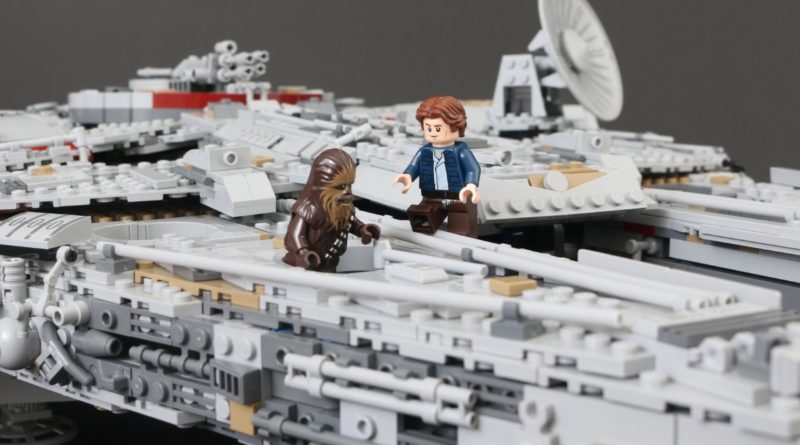 LEGO Star Wars’ Creative Lead explains how 75192 Millennium Falcon became the theme’s most expensive set of all time in 2017.

Before the second UCS Millennium Falcon came along, the LEGO Group’s most expensive set ever – 75159 Death Star – only just crept past the £400 mark. So when the LEGO Star Wars team finally pulled back the curtain on the hugely-anticipated 75192 Millennium Falcon, its price tag of £649.99 / $699.99 / €699.99 was absolutely unprecedented.

It came hand in hand with its piece count, of course, which – at 7,541 bricks – was (at the time) the biggest in a single set to date. Given the barriers it smashed through, it would be fair to assume the LEGO Star Wars designers might have had a hard time convincing the LEGO Group’s key decision makers to take the gamble on such a huge and expensive set – but that’s apparently far from reality.

“I think everybody was on board with this one,” LEGO Star Wars Creative Lead Jens Kronvold Frederiksen tells Brick Fanatics. “You know, it’s the Falcon, we need to have it, and it was respect all the way around for the improvements [on the previous UCS Millennium Falcon]. We also explained, hey, this is something we’re doing because we want to do it, but also because of the feedback we got from fans, so then it’s hard to argue. It was actually not a difficult process, I would say.”

The original Ultimate Collector Series freighter, 10179 Millennium Falcon, weighed in at ‘just’ 5,197 pieces in 2007 (and was also the biggest set of its day). But the upgrades implemented in its successor added another 2,344 pieces, taking the revamped Falcon way beyond the original – and, in a break from LEGO tradition, designer Hans Burkhard Schlömer had complete creative licence to use as many elements as he needed.

“When Hans designed the model, we added the interior and a lot of parts, and then we decided afterwards, okay, this will be the price tag for this model,” Jens says. “It was more, ‘We want to make the perfect model, and then the pricing will happen afterwards.’ Whereas it’s very often the opposite way, where you have to build the model for a certain price. But here we just wanted to make the ultimate Millennium Falcon, basically.”

Given no previous LEGO set had come anywhere close to 75192 Millennium Falcon’s price tag (and only 75313 AT-AT equals it to this day), it’s maybe not so surprising that there was no budget outlined beforehand. After all, what’s still one of the grails of the LEGO Star Wars theme would never have fit into the company’s existing price brackets – and is still the one to beat, especially with its recent price increase.

Check out all our celebrations of the UCS Millennium Falcon’s fifth anniversary here. The set is still available to order at LEGO.com (and is showing no signs of ever retiring).

Consider supporting the work that Brick Fanatics does by purchasing your copy (if you haven’t already!) using our affiliate links. Thanks.