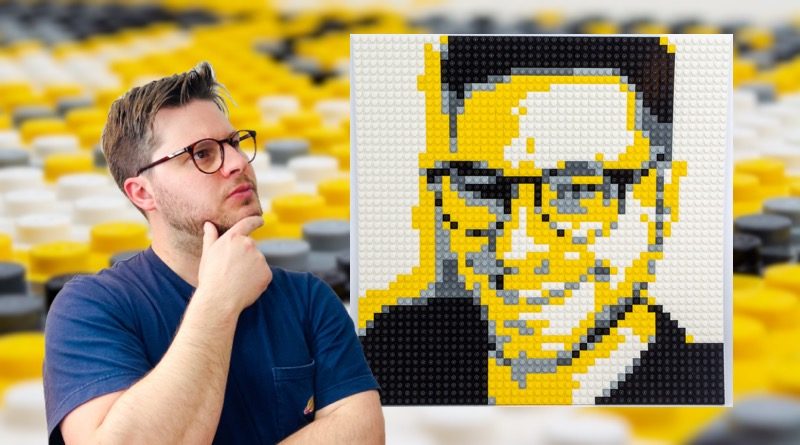 Sébastien Daniell takes the LEGO Group’s online Mosaic Maker experience for a spin in pursuit of a perfect mugshot for 40179 Personalised Mosaic Portrait.

Like many LEGO fans, I have yet to experience the thrill of the LEGO Mosaic Maker – and its ‘not a photo booth, but actually sort of a photo booth’ premise – in person.

Making its debut in Leicester Square‘s LEGO Store back in 2016, the Mosaic Maker offers willing participants the chance to recreate their portrait in a 2D brick-built medium, whilst also considerably slimming their wallet at the same time. I was lucky enough to be present when it was unveiled in London for the first time, but as yet haven’t coughed up £100 for the in-store opportunity.

Until earlier this year, Mosaic Maker booths were the only way you could create your own LEGO portrait (without resorting to custom tools or clever Photoshop manipulation, if you’re determined enough), so when I was recently given the chance to review 40179 Personalised Mosaic Portrait, I was eager to discover how it would work outside of the LEGO brand store environment.

Somewhat surprisingly (and as I mentioned in my review here) there are no leaflets, adverts or instructions of any sort included with 40179 Personalised Mosaic Portrait. This makes sense given it’s an infinitely customisable LEGO set, and other than simply placing the right piece in the right row/column, you don’t exactly need step-by-step directions like your average LEGO model.

The most unusual omission, however, is the lack of a URL or indication on how to create your mosaic in the first place. I can only assume this is presumably because the set was originally only designed to be an in-store experience and an online tool didn’t yet exist.

Granted, most of you reading this now are likely to be pretty online savvy, but if you were purchasing a set as a gift for someone who maybe isn’t as well-versed in the ninja art of Googling, it’s perhaps a little presumptuous of the LEGO Group to assume people would know what to do next.

If you have already purchased LEGO 40179 Personalised Mosaic Portrait, then the link you will need can also be found at the set’s online shop page.

Clicking through will prompt you to sign in first – or, should you not already be a LEGO VIP, create a new account.

You’ll then be presented with a brief list of the LEGO Group’s terms and conditions, explaining the supported file type and what you shouldn’t upload. The usual LEGO brand guidelines apply here, including things such as no drugs, weapons, nudity, offensive content, celebrity images, brand logos and so on.

A simple tick box allows you to proceed to the next screen where you can either search for the nearest store locations containing a physical Mosaic Maker booth, or choose to create a custom LEGO mosaic. Obviously, we’re choosing the latter.

Clicking through brings up a smaller pop-up box, providing some visual examples as to the types of photograph that should yield better results in brick form, and which ones will not. These will help, but once you start playing around with whatever photo you’ve uploaded, you’ll figure out pretty quickly whether it was a good choice or not.

Moving on, you finally reach the upload box, which allows you to select your chosen photograph for uploading. It’s worth pointing out that I tested this on both a desktop computer as well as from my smartphone, and it worked smoothly in both instances without any trouble.

Finally, you’re presented with what you’ve been building up to over the last few minutes, and it’s more interesting than I was originally anticipating. There’s a larger preview box in the middle, with six preset options down the left-hand side demonstrating the variety of visual effects available. Considering there are only five colours available to us in the set, it’s impressive how much variation is possible with one image.

Beneath the main preview box, you’ve also got a slider for zooming in and out of the image and then three more options for making small adjustments to the overall contrast. You’ll need to make sure you’re completely happy with the orientation of your photo in advance as there is no rotation option available at time of writing.

Depending on the image you’re using, you’ll find that the closer you’re zoomed in, the better the level of detail. This might mean not fitting in as much as you’d like, and that some hair or body is cut off. Unfortunately, due to the limited size of the mosaic you will eventually have to make a compromise somewhere.

After playing around a bit, you’ll soon find the version of the image you like the look of best, but it’s also worth considering the build here too. It’s highly likely you’ll be assembling the mosaic for many, many hours, so choosing an image you won’t immediately regret is the way to go.

The busy zig-zag yellow and black background might be quite funky, but will be more time-consuming to build than a singular colour background. It possibly won’t be quite as effective as a simple greyscale colour choice either, but that’s of course down to personal preference. Ultimately, the beauty of the set is that you can build and rebuild as many times as you wish if you are unhappy with the results, so it’s never going to be the end of the world – just your thumb.

Once you’re happy, click on the ‘I’m finished’ button and the following page gives you the chance to save your image, either to your desktop on a computer or to your photo roll on a smart device. It’s a high enough resolution that you’ll be able to easily zoom in on it and follow the pattern, allowing you to bring your fabulous face to fruition.

I did consider printing it off, but there are a few reasons why this isn’t the best option. Firstly, you’re saving paper and a considerable amount of ink by keeping it digital only. More importantly, on a phone or tablet you can easily zoom in to sections with your fingers, which I found myself doing constantly to avoid getting overwhelmed by a huge mosaic pattern staring back at me. Lastly, the backlit screen is extremely handy when working late into the night if your overhead lighting conditions are less than optimal.

Overall, it’s a relatively straightforward process with only a few minor barriers that I’m not entirely sure are necessary. Finding the app in the first place required a brief bit of searching on LEGO.com, whilst having to log in might cause a brief moan for any non-members. I also found the actual mosaic app a little sluggish on a laptop, but it seemed slightly quicker on my phone.

The choice of options for manipulation is pretty decent, and it’s surprising how much variety can stem from one photo after just a couple of minutes of toying with settings. A few more photo editing options might be a welcome addition though – especially something as simple as rotating clockwise/anti-clockwise by 90 degrees.

If I were to suggest any improvements to the LEGO Group, I would find a way to make the location of the app more immediately obvious, especially without any direction from within the physical set itself. Also, given how consumers tend to access media these days, I’m not entirely sure why this can’t be made accessible on iOS or Android for people to download as a standalone app.

It would probably feel easier to use if it was designed with phones or tablets in mind, and load even quicker, compared to navigating several different screens before getting to the fun part via the LEGO website, which seems a bit clunky and outdated to me.

Regardless of a few minor shortcomings, however, the Mosaic Maker online app does work more than well enough to accommodate the needs of the set, with extremely satisfying results once built with real LEGO pieces. If you’re considering this set and wondering about the way in which you translate your chosen image into a mosaic, hopefully I’ve managed to shed some light on the process.

You can check out our full review of 40179 Personalised Mosaic Portrait right here, then pick up your own copy at LEGO.com. Please consider supporting Brick Fanatics while doing so by purchasing through any one of our affiliate links. Thank you!