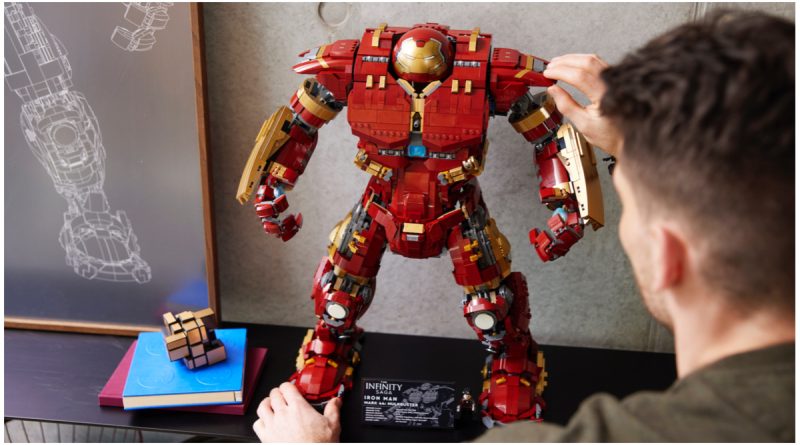 As two of the great LEGO themes, Star Wars and Marvel strive to outdo each other. But 76210 Hulkbuster appears to have an Achilles’ heel.

Love them or loathe them, there’s some cachet to the information plaques that started with the LEGO Star Wars Ultimate Collector Series and graduated to many of the flagship sets from other themes. They’re a subtle hint to the fact that this set is a) big and b) expensive. Or it’s 76217 I Am Groot. But mostly big and expensive.

The only problem was applying the sticker. Okay, as applying stickers goes, a rectangular sticker on a flat, rectangular plate wasn’t the most challenging, but it was likely to be the most visible of a set’s stickers, and if it went on ‘on the wonk’, or got a wrinkle or an air bubble, it was more than a little frustrating.

So there were cries of joy (and relief) when it was announced recently that plaques would, in future, be printed rather than use a sticker. However, after reading a little more closely, those voices suddenly cried out in terror and were suddenly silenced. Had something terrible happened? Well, the LEGO Group said that in future it would be the Star Wars UCS sets that got printed plaques. Not ‘every plaque would be printed’.

There had been a promising sign when the Technic supercar, 42143 Ferrari Daytona SP3 had a printed plaque, but with the announcement of the new 76210 Hulkbuster that promise seems to have been dashed. It’s getting a sticker. Still, what can you expect for £475? There are three lightbricks after all.

So when it comes to bragging rights, Star Wars still has at least one thing it can wave at Marvel while gloating. Tony Stark may have the ultimate LEGO mech, but when it came to fabrication, the spinning rims weren’t the only thing that got skipped.

If you’d like to support Brick Fanatics, then please consider purchasing your LEGO via our affiliate links. Thanks.