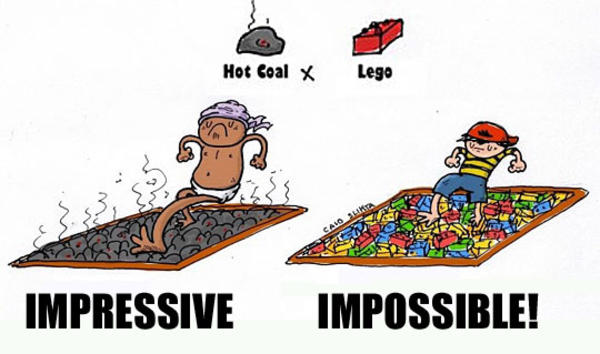 We’ve all done it and no matter who you are, standing on LEGO bloody well hurts, we’ve seen all the memes on the net regarding standing on LEGO, then there are the images with the rage-filled punchline: “I hope you step on a LEGO!”

It’s an instantly evocative phrase, because anyone who has ever stepped on one of those tiny plastic bricks will never forget the almost inexplicable pain. Now, the American Chemical Society Reactions series has released a video that gets to the bottom of why stepping on a LEGO can cause such intense pain.

Part of the problem is that the average human foot can have up to 200,000 individual sensory receptors, with the force of your body weight concentrated on the point of the LEGO contact with the foot. The other comes from the chemical make up of the LEGO itself (hence the interest of the American Chemical Society).

LEGO is made of ABS plastic polymer chain of three key components that give them their resistance, shiny hardness, and mega-strength. Those three traits translate to massive foot pain, when a 165-pound person steps on a tiny LEGO brick in the middle of the night on their way to the bathroom, generating three million Pascals of pressure and a scream loud enough to wake the children.

Story via The Oregonian