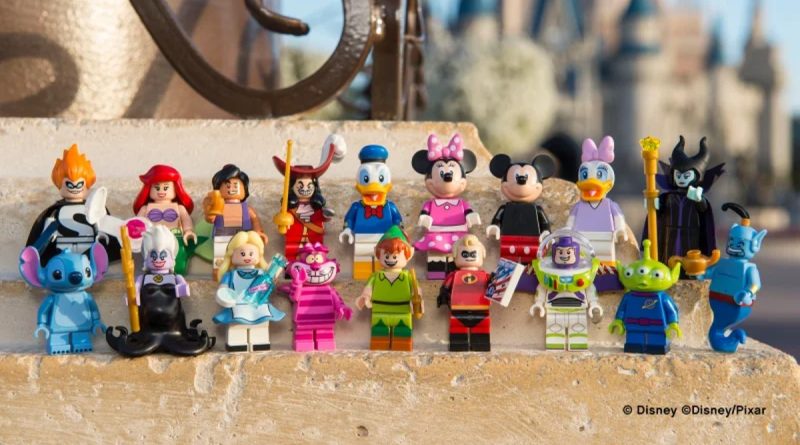 LEGO Collectible Minifigures is rumoured to feature a Disney 100th anniversary series in 2023 and there are hundreds of films and shows it could draw from.

While the reports have yet to be confirmed by the LEGO Group and still should be taken with caution, rumours are that for the 100th anniversary of Disney in 2023, a Collectible Minifigures series will be released for it.

We’ve already had two series dedicated to Disney before, but they haven’t even come close to representing their hundreds of iconic characters in minifigure form. Keeping in mind that this is only speculation based on the reports, here are 12 characters we’d love to see in another LEGO Disney Collectible Minifigures Series.

Oswald the Lucky Rabbit is a character created by Walt Disney for Universal Pictures in 1927 but the rights to the character were taken over after some time, causing the creation of Mickey Mouse as a replacement.

As of 2006, the rights to Oswald are back in the hands of Disney and considering that we wouldn’t have Mickey without him, a minifigure of him for the 100th anniversary feels suitable.

Anna and Elsa have already been featured as minifigures in 71024 Disney Series 2 and Olaf and Sven have dedicated pieces as well, leaving just one member of the main Frozen cast without a minifigure.

A third Disney Collectible Minifigures Series could be a great opportunity to complete the Frozen minifigure collection with a Kristoff minifigure and include the popular film at the same time.

Cinderella is one of the most well-known Disney Princesses and even has a huge LEGO castle in the form of 71040 Disney Castle. However, she doesn’t have a minifigure.

A Cinderella minifigure in her iconic dress conjured by the Fairy Godmother could include details such as the glass slippers and perhaps Gus Gus from 43192 Cinderella’s Royal Carriage as an accessory.

Encanto has seen streaming success and has already been named as a franchise by Chief Executive Officer Bob Chapek, despite only having one movie.

Lilo & Stitch currently have a project in the LEGO Ideas second 2022 review but only Stitch has an official minifigure in 71012 Disney from 2016.

Another Disney series could be an opportunity to complete the duo with a Lilo minifigure, without needing a new part for an alien head.

As a realistic suggestion, Mickey would need a spot in a third Disney series and the 100 Years of Wonder imagery features the vintage version of Micky Mouse in sparkling attire.

This look might translate well into minifigure form and make sure the character has a spot in a third series at the same time.

Pairing with Mickey could be a 100 Years of Wonder Minnie Mouse minifigure, also featuring a sparkling dress.

These two minifigures could also be a chance to include some interesting accessories paying homage to the history of Disney.

As one of the first Disney Princesses, Snow White has only had a mini-doll so far, and even that is a rare occurrence in LEGO Disney.

Another Disney Collectible Minifigures Series offers the chance to give her a minifigure using the specialised hair piece that is already in production.

Creating another pair with Mirabel, we’d like to see Bruno get a minifigure too as the character was missing from the LEGO Encanto sets.

Alternatively, any member of the Madrigal family would work well in this slot to represent Encanto and stand alongside Mirabel.

A Mary Poppins minifigure could lend itself well to the traditionally high levels of detail featured in Collectible Minifigures Series.

There are plenty of opportunities for accessories too, such as the animated penguins and her iconic umbrella.

The first Disney Collectible Minifigures Series featured a pair of Alice in Wonderland Characters in the form of Alice and the Cheshire Cat. However, that could always become a trio.

The Mad Hatter as a minifigure could be useful for both Disney and DC enthusiasts, going along with the minifigures from 71012 Disney as well as providing pieces for a custom DC Comics villain minifigure.

Another option for the iconic mouse in a third Disney Collectible Minifigures Series could be Sorcerer Mickey from the 1940 film Fantasia.

The wizard hat worn by this version of Mickey Mouse is something that might be best achieved using a new element of Mickey’s head with the hat within or around the ears – something that a Collectible Minifigures series can help with.