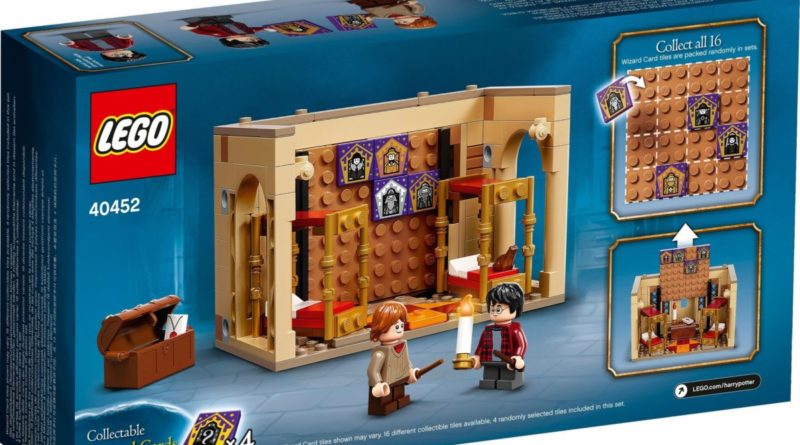 The Australian LEGO website has posted official images of 40452 Gryffindor Dorms, a new promotional item for the Harry Potter range.

Drawing inspiration from the early films in the series, the model depicts the boys’ dormitory within Gryffindor Tower. It’s designed to slot into the current crop of Hogwarts castle models; although it depicts numerous scenes, a dormitory has been conspicuously absent from this iteration so far.

In addition to the four-poster beds the carpet features the red and yellow Gryffindor house colours, as well as a Chocolate Frog and four random wizard cards.

As more clearly demonstrated in these new pictures, 40452 allows fans to display collectible wizard cards within the set itself. However, the relevant piece can also be removed for a scene that’s more accurate to the movies.

In spite of these new images, there’s still questions about the set’s availability. Early promotional calendars stated the set would be available from October 25, 2021. However, this promotion was later removed, leaving its appearance up in the air. If it does appear in the near future, customers must spend $100 on Harry Potter sets to receive it.

A smaller model, 30392 Hermione’s Study Desk, will also be available in-store. This will require a $40 purchase of relevant sets instead. UK fans can expect to pay around £100 and £40 respectively.