Tucked deep in the Scottish highlands, Hogwarts Castle may be invisible to muggles, but you won’t need the Marauder’s Map to find your way around the latest magical offering from the LEGO Group as we delve into part two of our exclusive interview with set designer Justin Ramsden

After LEGO released a set as large and detailed as 71040 Disney Castle, the bar had already been set extremely high. With the promised return of Harry Potter within the new Wizarding World theme, anticipation for a similarly large and exclusive set was growing by the day. When the official announcement came for a breathtaking 6,020-piece set, initial reactions were overwhelmingly positive.

Brick Fanatics caught up with LEGO’s resident wizard, designer Justin Ramsden, to find out more about the magic of 71043 Hogwarts Castle.

How many references to the films did you manage to fit into this set?

There are a lot. This is probably the greatest number of Easter eggs I have managed to cram into any one model. I’m used to sneaking in things here, there and everywhere but I worked with a fantastic graphic design team who were huge Harry Potter fans, so we have had a lot of fun asking ourselves ‘oh can we put in a reference to this in here, or write this on the blackboard, or the clock could say this certain time?’ So there’s a lot of different references to look out for that we managed to sneak in from the Harry Potter Wizarding World.

The biggest one for me is probably the 6,020 piece count which is also an old set number reference to Magic Shop, one of the first ever sets with a wizard in.

That is a such a great idea. How did you manage to get it to the exact number you wanted and did you already know the set you were going to link it to?

Well, when I was working on the main tower I had a lot of trouble figuring out how I was going to build it. The two designers, Mike Psiaki and Carl Merriam, who made the NASA Saturn V, were like “oh you should really use this cool building technique we’ve just developed for this rocket”, which I was absolutely on board with. So we had a good rapport with them and then I saw at the time they were putting their piece count to match an event [1,969 pieces, also the year of the launch of the rocket and moon landing].

I thought how it would be awesome if I could do this too, so I quickly counted up all the bricks and got to 6,024, which sounded perfect for a set number. I then searched online and found a set that looked like it was from a theme I loved when I was younger, so was sure there would be some sets around that number that I had as a kid. On the annual LEGO Inside Tours there’s three major sets I always tell people about that made me immediately want to be a LEGO designer, which are 6246 Crocodile Cage, 6020 Magic Shop and 6279 Skull Island. People might recall me mentioning Skull Island in the Channel 4 documentary when I said that I found it on the lawn and it was Christmas Day, so that one for me is a pretty major one.

6020 Magic Shop of course is one of the first sets that a wizard came in and also I had it as a child. It’s incredible because of the wizard, his glow-in-the-dark wand and a sword – what more do you want, so I thought I must make it fit. At 6,024 pieces I was wondering what I could cut out but still allow the model to work perfectly. There was a lot of fine tuning to get it down to 6,020, but we managed to get there in the end.

Have you built the set from instructions yourself? 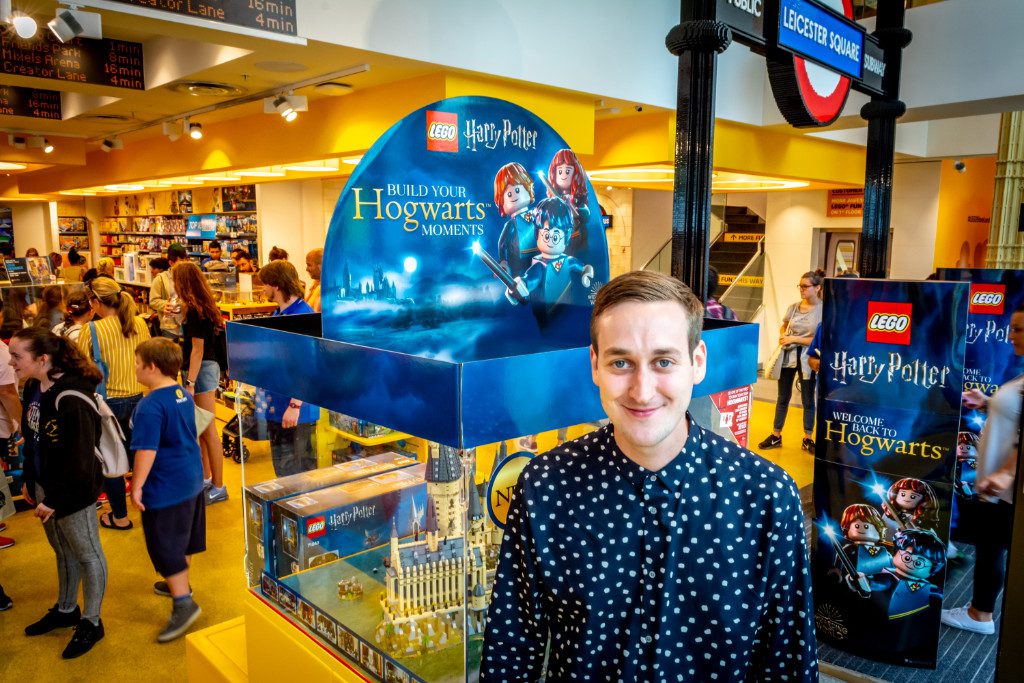 What is your overall favourite part of 71043 Hogwarts Castle?

Two things. In the defence against the dark arts chamber, I really like the Cornish pixies sticker. It’s just a really, really tiny thing but when the designer drew it up I thought it looked so fun. The whole classroom was a joy to build, it’s got a massive gramophone and the Boggart wardrobe and the magnifying glasses, I really just tried to shove in as many LEGO elements that people will enjoy that also help capture the whole essence of the room.

The other thing I really like is the Room of Requirement – mainly because it’s pretty much how my desk is, just a load of stuff, a hoarder’s paradise, but through the deco as well we managed to get different LEGO elements. I really enjoy building stacks of things, so if you enjoy therapeutic building, then the Room of Requirement is for you because there’s just a lot of repetition.

Did you have any interaction with JK Rowling at all during the design process?

No I didn’t, but I do hope she likes it when she sees it. She was lucky enough to see some of the LEGO line, which I only know through her Twitter account when she posted a photo showing the Niffler, which is fantastic. Hopefully she likes this set and builds it too.

It would be remiss if we didn’t ask you a few specific Harry Potter-related questions. If you could go to Hogwarts, which house would you be in?

Ravenclaw, absolutely. I know that Hufflepuff are often seen as the underdogs, but I don’t think Ravenclaw gets the justice it deserves. Everyone loves Gryffindor, and even Slytherin, but for me it’s got to be Ravenclaw, hands-down.

Who is your favourite Harry Potter minifigure overall?

I really like the Professor Snape with the glow-in-the-dark head from the very first sets the LEGO Group did. I think it was crazy that he had glowing skin. From the new line, probably Luna Lovegood from the Collectible Minfigures series is really sweet, or anyone with the teenage legs; to finally get an in-between kid legs and adult legs is fantastic.

Which is your favourite nano-fig in this set?

Professor Umbridge or Professor Lupin. She’s amazing and the fact that we managed to get her in her shocking bright pink too. But everytime I see Lupin’s moustache it gets me, it’s so crazy how much it looks like him.

If you could choose to design anything else from the entire Wizarding World as a LEGO set, what would it be?

I’m just going to say wait and see. For now that covers all bases…