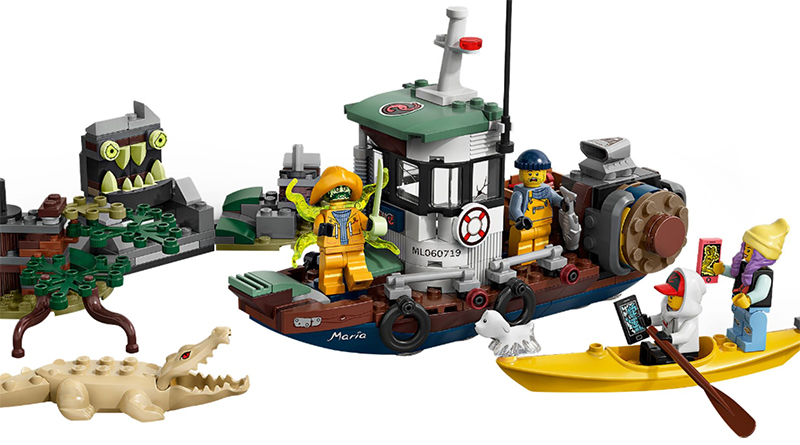 To really understand the spooky story behind LEGO Hidden Side 70419 Wrecked Shrimp Boat, Brick Fanatics does straight to the LEGO designer behind the set

LEGO Hidden Side Senior Model Designer Luis Gómez was part of the team that worked on bringing the spooky new theme to life. With some help from Senior Product Lead Murray Andrews, he explains to Brick Fanatics the concept behind 70419 Wrecked Shrimp Boat.

“Newbury is a city by the coast and there is a shipwreck,” Luis explains. “This island also gets possessed and then you have the ship captain, he gets possessed with his son. When you put it together you scan it and start playing the experience. Here you have the colour wheel which lets you see the ghosts in the different domains, spectrums or dimensions.

“Then here we have our heroes, Jack and Parker. They have come to this scene to just look for ghosts. This one is actually new this year, their companion dog, which is our first ghost dog. So you can see that we have combined the white and the clear. He is Jack’s dog, his name is Spencer.”

“Unfortunately Spencer dies early on in the story and that is how Jack is first introduced to the ghost realm,” Murray adds. “The dog comes back and it is actually the only ghost that you can see in physical form, you need the app to see all the others. It is a cool little element.”

“We know that shipwrecks look cool and they make a cool scenario,” Luis continues. “But also a lot of kids like to roleplay with their boat, so we realised okay, let’s make it so a specific mode looks like a shipwreck but then in another mode is just a boat that the kids can roleplay.

“For some of the hero vehicles we don’t really have a transformation, so the transformation mainly happens in the other vehicles or in the playsets. In this case I was very limited in space, you need a lot of space to make the functions. Since we are going to have the shipwreck and going to have the island, let’s make the island look like it just got possessed. Maybe it was the reason that the boat broke in two and ended up in the island, because the whole island got possessed.

“For the characters we made these new elements, so this is a new element we developed for Hidden Side and again the heads that you can transform. This character on the boat will come with a normal head so you can play both possessed and not possessed with that character.”