The LEGO Foundation has employed a British headteacher to promote play in education, as the organisation continues its drive to change the way children are taught.

As headteacher of Kingussie High School in the Scottish Highlands, Ollie Bray abandoned the curriculum in favour of project based learning intended to better engage the school’s 450 pupils. His attitude to education lines up with that of the LEGO Foundation, where he has been appointed as Director of Global Initiatives to Connect Play and Education. It is part of the LEGO Foundation’s determination to emphasise the importance of play in learning.

“Learning through play is widely accepted in the early years and my job will be to find ways of extending it by incorporating it into the curriculum for older children,” he told the Guardian, in an interview about his new role. “A result of this loss of playfulness is the teacher who gives a lesson on the first day of the new school year and then every September for the next 30 or 40 years. The ability to develop key skills of initiative, ability to work with others, problem-solve and keep up with digital advances is being stripped out, and yet when young people are squeezed out of education this is just what employers are looking for.” 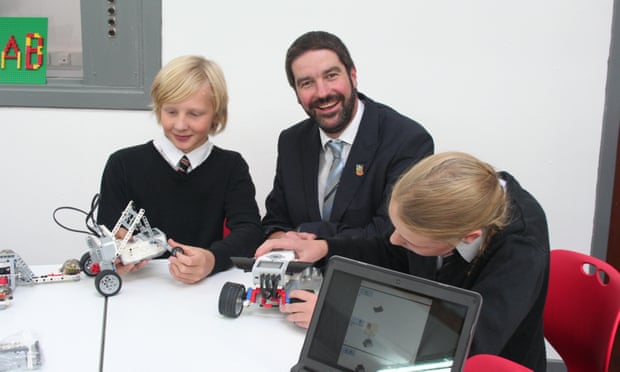 The educator sees a difference between fun and joy, with the latter being something he seeks to promote in his quest to help children learn through play. “The word ‘fun’ is really, really dangerous in education. There’s a difference between enjoyment and fun. You can have fun that’s not particularly purposeful. But joy is a deep feeling, which gives you that long-lasting buzz because it feels important. The curriculum has to be relevant to the students’ lives. It’s important that they identify the problem and want to find ways of solving it.”

Companies such as Google as Intel have visited the school, and been surprised at how casually children use technology. “What surprises companies such as Google when they visit is the way the children take the technology for granted and are not particularly interested in talking about it. They are focusing on real-life, local problems and projects on our doorstep, with our neighbours such as the Highland Wildlife Park and the Folk Museum. We are not developing a nation of super geeks!”