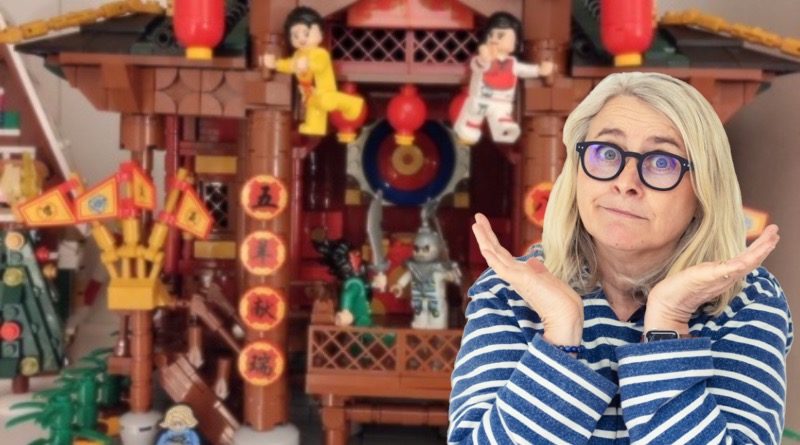 Is it ever okay to buy fake LEGO? Emma Kennedy gets existential for Brick Fanatics as she ponders the ultimate ethical dilemma – for LEGO fans, anyway.

All great things have imitators, and I suppose we have reached that point where we need to slide sideways into a darkened room, don balaclavas, and discuss – cue a woman screaming – Fake LEGO (or FLEGO).

There are two camps of opinion on FLEGO: the first are the purists who will accept no substitutes, and the second are the fly-by-their-pants rabble rousers who think nothing of a minifigure with a wonky eye as long as it’s a bargain.

We’ve had vociferous discussions on this over at Relax With Bricks. I’ve got AFOLWACs (Adult Fans Of LEGO Who Are Chums) who are adamant that FLEGO must not darken our door. The LEGO Group has a massive problem with companies, many based in China, ripping off designs. As soon as it manages to shut one down, another will pop up. I feel quite strongly on this. As long as a LEGO set is being sold by LEGO – forget it. No way.

But then there’s the murky area. Let’s think of a set that has been long retired. You really want it but when you look at the secondary market, it’s extortionate and well beyond your means. With the LEGO Group now out of the picture (they’ve sold all the sets they’re selling) is it now morally acceptable to purchase a knock-off set at a fraction of the price?

This is a tough one. On the secondary market, 21310 Old Fishing Store will now set you back the best part of £400. If you get a replica, it’s £65. For people whose budget can’t stretch to the real thing, the latter is going to be their only option.

I should add here, if you are in this position, this would be a perfect opportunity for an Author’s Own. That’s the name I give to builds where I’ve purchased the instruction booklet on eBay and used my own bricks. This is precisely what I did with the Old Fishing Store, topping it up with the LEGO pieces I didn’t have from Toypro, and Bob’s your uncle – you get the Old Fishing Store for less than the price of the knock-off and it’s all made with beautiful LEGO. If you have an extensive LEGO collection, you’ll be amazed how many big sets you can make with what you’ve already got.

There are, of course, some companies that come up with their own designs. I have a member of the AFOLWAC gang who regularly builds FLEGO original designs. He’s built a Mould King Botanical Gardens, a Corner Post Office, a Sky Castle and an apocalyptic diner complete with zombies. They’re impressive to look at and I can’t fault them on design. Even so, I always ask him to report on the Shonk Factor and, to date, he reports it as being ‘low to zero’.

Sadly, that’s not my experience. As an experiment, I was sent an original design, Xingbao Toy and Bookstore. It was the worst building experience of my life. The design was horrific, the bricks horrible and the minifigures, that come in bits, were the saddest things I’ve ever seen. “PUT THEM OUT OF THEIR MISERY!” shouted one of the AFOLWACS, and I did. There was no pleasure to be had in constructing something that was simply awful. At the end, I pushed the whole thing off the table, filmed it in slow motion, and threw every last scrap of it into the bin. It actually made me furious how bad it was.

I’m firmly in the Don’t Buy Anything From FLEGO Companies Ever camp. Giving funds to counterfeit companies is only going to encourage them to keep churning them out. Lepin, one of the worst offenders, was busted by the police in 2019 and found to have $30 million worth of fake LEGO. The LEGO Group and its designers put a huge amount of effort into models, minifigures, box design and instruction booklets. Everything about rewarding counterfeit companies is just plain wrong.

So stick to your LEGO, dear brick chums, and never forget, the instruction booklets for pretty much every set that’s ever been designed can be downloaded. You’ve got heaps of LEGO! Use it!

One thought on “Is it ever okay to buy fake LEGO sets?”