With the LEGO Star Wars range for the Han Solo stand-alone movie expected to be April 20, 2018, Brick Fanatics asks if fans can keep up with the relentless releases…

As reported earlier today, the LEGO Star Wars range for the upcoming Han Solo stand-alone is rumoured to be arriving in stores on April 20, 2018. That will be just four months after Star Wars: The Last Jedi, the latest movie in the core saga is released, and after a January 2018 LEGO launch that in all likelihood will include Star Wars sets.

The two movies, and associated product launches, coming so close to one another may just be a blip as Lucasfilm shifts the release date for Star Wars movies away from Christmas and back to May, the traditional month that saw the films released from the original in 1977 until Star Wars: Revenge of the Sith in 2005.

The Force Awakens, when it signified the return of the cinematic story in 2015, had a particularly early product launch date of September 4. On that day, all of the merchandise – including the LEGO Star Wars sets – had the embargo lifted and made available to buy. It was unprecedented for Lucasfilm to hide the product until the very day of launch. The merchandise was then available for over three months before the movie was released on December 18, 2015, ironic considering how determined director J J Abrams was to maintain secrecy regarding the plot and characters.

There are various reasons for why the release date was so early, which are largely based around the movie’s proximity to Christmas. Most large retailers reset the shelves several months before Christmas itself, filling the aisles with the products that are set to be the must-have toys. If the Star Wars: The Force Awakens merchandise had missed this, it would have meant getting relegated to sub-par locations in stores, if making it in at all.

The reason that big retailers set the shelf space so early relates to how early many shoppers start buying for Christmas – some are even organised enough to be thinking about such things in August. Budgeting for the big splurge means that Christmas shopping is spread across several months, so if Lucasfilm were to launch the Star Wars range any later, those sales might go to another toy brand or franchise.

So fans saw a big LEGO Star Wars launch in September of 2015, although the following year Rogue One: A Star Wars Story toys were launched a little bit later. It was on September 30, 2016 that a smaller range of LEGO Star Wars sets were part of a scaled back, although still significant, movie product launch. This year, with the release of Star Wars: The Last Jedi, the range is bigger again and the release date is set for September 1, 2017 – back to three and a half months before the movie release.

What is perhaps most surprising – and confusing – to fans is that despite the LEGO Group having these big movie tie-in launches scheduled in September, just a few months prior in July a whopping summer launch hits too. Of course the LEGO Group has always had a big summer product range, but there is nothing to say it absolutely must include Star Wars. It means that LEGO Star Wars gets a January launch, a July launch and then a September launch – that’s a lot of product for fans to absorb.

The benefit for LEGO designers is that it allows the opportunity to visit all different aspects of the growing saga – 75169 Duel on Naboo representing a memorable prequel moment, 75170 The Phantom providing some Rebels love, 75174 Desert Skiff Escape giving the classic trilogy a nod and even the Clone Wars getting a look-in with 75168 Yoda’s Jedi Starfighter. That’s as well as slots being given to vehicles from the new films too.

The drawback to this is that there are dozens of LEGO Star Wars sets on the shelves at any one time, an unmanageable amount. Very few collectors can buy them all, even fewer children can buy them all. Of course no-one is expected to do so, but even asking AFOLs and children to keep track of these releases is becoming a big ask. When gift buyers go into a toy store to buy a LEGO Star Wars set for a child, it must be completely baffling to look at the range and identify which part of Star Wars they are aiming for.

Anecdotal reports suggest that Rogue One merchandise did not sell in the way that had been intended, with more stock left over than suppliers would have liked. Although it is unclear to what extent this affected the LEGO Group, changes may be made in how licensing for the films and the relevant launches are handled going forward. With the constant onslaught of merchandise, with LEGO launches expected September 2017, January 2018, April 2018, July 2018… LEGO Star Wars fans may well get collecting fatigue, being constantly asked to look at new product to the point that it all becomes a bit numbing.

It also makes it challenging for the movies to get the deep-dive they used to. Fans will still be reeling from The Last Jedi by April 2018, but the focus will sharply shift to the Han Solo origin movie. In the past, with movies spaced three years apart, the LEGO Group would have spent that time releasing additional sets based on some of the background vehicles, or designs that were added late in production. Up until 2015, only the animated TV series provided fresh content for the LEGO design team. Since then, Lucasfilm has been releasing films at such a rate that the LEGO Group barely get the chance to scratch the surface of the latest movie designs before having to move onto the next one.

While it is nice to offer a mix of LEGO Star Wars from across the saga – which gives fans something to desire no matter which part of the franchise they prefer – going forward it might be better to focus the line more and reduce the number of sets released each year. Too much, too quickly has the potential to harm the line’s longevity if fans decide it is all too much to stay on top of. For the next twelve months, however, fans better get ready for plenty of LEGO Star Wars…

LEGO 76178 Daily Bugle is the biggest Marvel set of all time with 25 minifigures visiting . . .

END_OF_DOCUMENT_TOKEN_TO_BE_REPLACED

LEGO Marvel 76199 Carnage is now available to order through Zavvi, and it comes bundled with . . .

END_OF_DOCUMENT_TOKEN_TO_BE_REPLACED

The LEGO Group has now confirmed the exact time the fifth LEGO VIP collectible coin will . . .

END_OF_DOCUMENT_TOKEN_TO_BE_REPLACED

Just as we suspected it might, LEGO Marvel 76191 Infinity Gauntlet has officially set a new . . .

END_OF_DOCUMENT_TOKEN_TO_BE_REPLACED 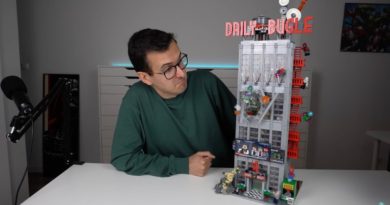 The first reviews of the newly-announced LEGO Marvel 76178 Daily Bugle are already starting to appear . . .

END_OF_DOCUMENT_TOKEN_TO_BE_REPLACED

Explore every single inch of the soaring LEGO Marvel 76178 Daily Bugle – including its incredible . . .