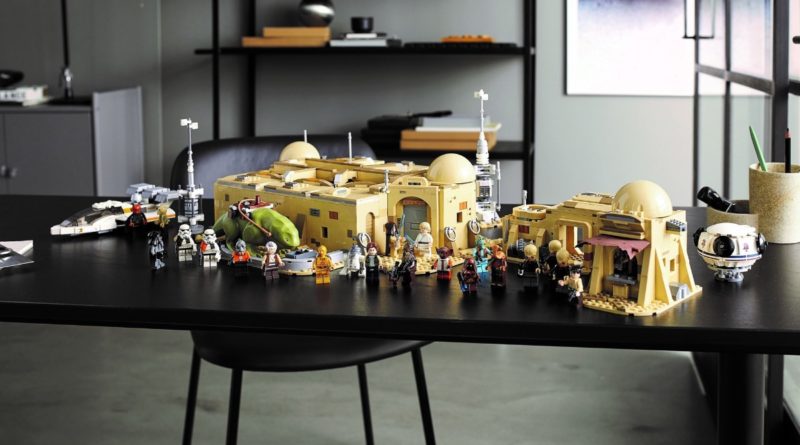 75290 Mos Eisley Cantina – a generous release in the LEGO Star Wars theme – is available now with a discount in the current John Lewis LEGO sale.

A relatively new release in the LEGO Star Wars Ultimate Collector Series, 75290 Mos Eisley Cantina is a detailed recreation of the Tatooine drinking hole. As a large, ambitious set it carries an RRP of £344.99 – but by applying the code LEGOOFFER at checkout on the John Lewis site, you can bring that price down to £284.99 instead. That represents a 17% saving on the usual price.

The Mos Eisley Cantina is a drinking establishment which first appears in Star Wars Episode IV: A New Hope. It’s visited by Luke Skywalker and Obi-Wan Kenobi in the film’s first half, and plays host to a number of famous scenes. Examples include Luke’s encounter with Ponda Baba, the introduction of Han Solo and Chewbacca, and the infamous showdown between Han and Greedo – inspiration of the ‘Han shot first’ controversy.

While the LEGO Group has depicted the cantina on several occasions, this version is by far the most impressive. The finished model depicts the entire cantina, as well as some of the surrounding vehicles and structures. It can be displayed as an enclosed building or folded out, measuring 52cm wide and 58cm deep in the latter configuration.

The inside of the cantina features the main bar and several shadowy booths, allowing the cantina’s patrons to conduct their illicit business in private. However, the roof panels above each booth can also be removed for greater access.

21 minifigures are provided to populate the cantina; several of them, like Ponda Baba, Garindan and Momaw Nadon are exclusive to it. However, there are several more familiar characters including Luke Skywalker, Obi-Wan Kenobi, Han Solo, Chewbacca and a trio of Bith musicians.

The outside of the cantina features many fine details including a feeding trough (and a Dewback to feed at it) as well as a pair of moisture vaporators, stacked crates and tethering rings for animals. There’s also a pair of generic Mos Eisley buildings, which can be attached to the cantina or displayed apart from it; each features interior furnishings, including a blue kyber crystal used in lightsabers. A V-35 Courier landspeeder and Ubrikkian 9000 landspeeder round out the set’s scenery, making this model an excellent choice for dedicated Star Wars fans.

Buying this set from John Lewis will also net you free delivery, and guarantee you a solid customer service experience from start to finish. Make sure to check out our LEGO deals page for more great LEGO discounts, and use our on-page affiliate links to support the Brick Fanatics website.