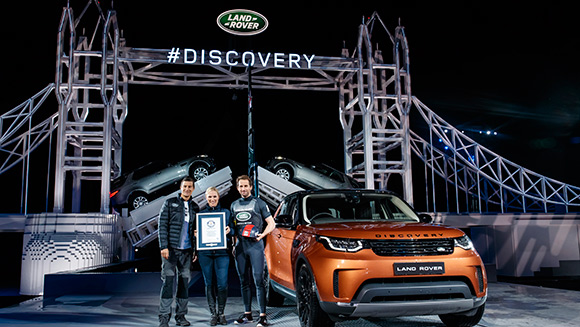 A LEGO related world record has been broken by Land Rover. This week sees the Paris Motor Show display all that is new and shiny from the world of cars, as the location alternates with Frankfurt every year. Land Rover have taken the opportunity to launch their new Discovery 5. It is a very British car and the styling cues echo that of the Range Rover, which gives a very familiar look and feel to the range. Also a testament to the R&D and investment that the Tata Group has put into Jaguar Land Rover over the last few years.

To help launch the Disco 5, Land Rover got a few people to help out with the launch – Bear Grylls, Sir Ben Ainslie, Zara Tindall – as well as engaging with Duncan Titmarsh and the crew at Bright Bricks to create a 13 metre high replica of Tower Bridge from LEGO bricks. Guinness World Records officially confirmed the achievement:

The creation now holds the title for Largest Lego sculpture (most bricks), with the replica of the London landmark created using an astounding 5,805,846 individual pieces, beating the previous record by 470,646 bricks.The star-studded launch event saw British adventurer Bear Grylls abseil from the top of the huge Tower Bridge installation, through the open drawbridge and onto the stage beside the New Discovery.

The finale saw sailing Olympic gold medallist Sir Ben Ainslie drive the new SUV through 900mm-deep water under the bridge, while towing a LEGO replica of the Land Rover BAR boat, a 186,500-brick model of the boat that will challenge for next year’s America’s Cup.

Led by the UK’s only LEGO Certified Professional, Duncan Titmarsh, it took five months for expert LEGO Master Builders in the UK to construct the Tower Bridge structure. It was erected in the grounds of Packington Hall for the event, close to Land Rover’s Solihull plant where the New Discovery will be produced.

Speaking on confirmation of the record, Emma Owen, LEGO UK and Ireland Spokeswoman, said: “We are thrilled that Jaguar Land Rover has used LEGO bricks to add some Guinness World Record-breaking creativity to the launch of the latest Discovery. This is an epic, outstanding build that absolutely captures the imagination in a way we haven’t seen before.  With LEGO bricks and some imagination you really can build anything!”