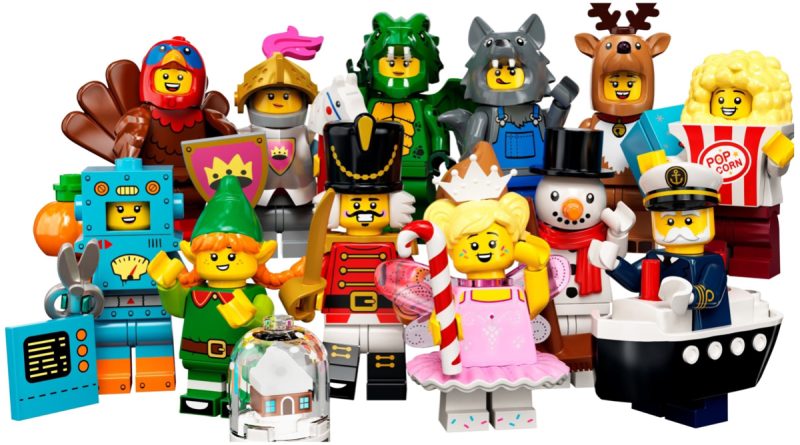 Start feeling the Christmas spirit as 71034 Series 23 of LEGO Collectible Minifigures launches with a dozen new characters to track down.

It only seems like yesterday that we were getting excited about the first (and probably last) set of Muppet Collectible Minifigures. But that was way back in May, which means it’s time for a new collection. 71034 Series 23 launches today, with 12 new characters to try and find, and for those with nimble fingers, there’s a good chance that this will be the last set to test your feeling skills.

While Series 23 will be in the familiar blind bags, it’s highly likely that from next year, Collectible Minifigures will sold in cardboard boxes. Better for the environment, but rather less great for those trying to avoid the dreaded doubles. But for now, the blind bags remain, and the new set are all loosely themed around celebration, with six of the minifigures being Christmas-specific. The figures will retail at £3.49 in the UK, $4.99 in the USA and €3.99 across Europe.

The Christmas-themed figures include a Sugar Fairy, a Turkey costume, a traditional Nutcracker figure, a Christmas Elf, a Reindeer costume and that staple of the season, a Snowman. The set is completed by a Green Dragon Costume, a Ferry Captain, a Popcorn Costume, a Cardboard Robot, a Wolf Costume and a Knight of the Yellow Castle, which may come in useful if you’re lucky enough to open 10305 Lion Knights’ Castle on Christmas Day.

As is usually the case, the Minifigures should be available for around four months, which will take them through to January 2023 when, if the rumours are true, we should expect to see 71037 Series 24. If you want to guarantee yourself a complete set, then a box of 36 Minifigures should contain three full sets, assuming that no Christmas elves have thrown a toy spanner in the works.

Support the work that Brick Fanatics does by purchasing your LEGO via our affiliate links. Thank you.