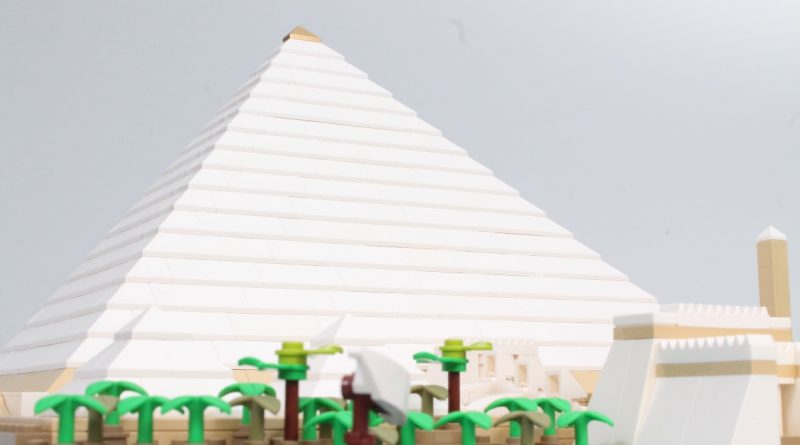 The latest LEGO Architecture set makes the theme ancient history with 21058 Great Pyramid of Giza, a model that mirrors the thoughtful design of its source material – with impressive results.

Standing as the oldest of the Seven Wonders of the Ancient World, and the only one still (mostly) intact, the Great Pyramid of Giza is Egypt’s largest pyramid, built as the final resting place of pharaoh Khufu. It’s comprised of roughly 2.3 million individual blocks (compared to the LEGO set’s 1,476 pieces), and was constructed in the 26th century BC – some 4,500 years ago – across a period of 27 years.

While we don’t know for sure how the pyramid was assembled, modern archaeologists have contradicted long-held beliefs that slave labour was used (so the LEGO Group’s conscience is in the clear). In fact, the thousands of workers who brought the Great Pyramid of Giza to fruition were likely rewarded handsomely, with the highest-quality food and, erm, short lives of back-breaking labour.

Thankfully, you won’t need to put anywhere near the same effort in to build your own ode to this incredible monument with 21058 Great Pyramid of Giza – a LEGO Architecture set that smartly sidesteps the prospect of building a LEGO pyramid. Sort of.

— Where to buy LEGO Architecture 21058 Great Pyramid of Giza —

21058 Great Pyramid of Giza is available to buy at LEGO.com and in LEGO Stores, if you’re interested in racking up VIP points, or is otherwise available at third-party retailers including Zavvi and Hamleys. We’ve already seen decent discounts on its RRP through those outlets, too.

Close your eyes and think of the phrase ‘LEGO pyramid’. What comes to mind is probably the kind of thing we all built as kids, stacking bricks up into a triangular prism. Those of us lucky enough to have enough slopes could at least stop it looking like a blocky nightmare, but chances are it would still be a haphazard mess of colours (although beautifully and authentically LEGO as a result).

An official LEGO pyramid therefore offers the perfect opportunity for a build that accurately depicts the oldest of the Seven Wonders of the Ancient World, but – as you’ll hopefully also remember from stacking up those bricks eons (if not quite millennia) ago – one that probably isn’t much fun. The LEGO Group has smartly swerved that inevitability by cutting away half of 21058 Great Pyramid of Giza, and instead fleshing out the rest of its sprawling 44×40-stud base with a snapshot of ancient Egypt’s sphinxes, smaller pyramids, a worker’s village and even part of the River Nile.

For all the jokes made about the LEGO Group only giving us half a pyramid, that was exactly the right choice: the surroundings add colour, vibrancy and interest to 21058 Great Pyramid of Giza, while simultaneously preventing the build from becoming a monotonous chore. It’s also a unique twist for the Architecture theme: where all its other sets focus on modern depictions of buildings, places and monuments, this set instead portrays the fabled tomb as it originally stood in the 26th century BC, amid lush desert surroundings.

But that’s only one half of the puzzle: the second comes when you reach the eponymous structure, built in gleaming white to mirror the pyramid as it first stood some 4,500 years ago, and face the prospect of stacking tonnes of white slopes.

Instead, you’ll actually begin with a sizeable pile of tan pieces, used to create an ‘interior’ for the pyramid’s outer shell. This portrays a smaller pyramid currently under construction, offering some educational insight into how the ancient Egyptians managed to assemble these monoliths, and – thanks to its carved-out passageways at the back of the structure – is a little more involved than just stacking bricks. (Placing all its 1×1 and 1×2 tiles can get a little fiddly, though.)

This core structure is actually what’s left of the pyramid in the 21st century, with most of its white limestone casing stripped away, so it serves a triple purpose in LEGO: it’s a more interesting build, gives a flavour of the real-life construction process, and offers the chance to display a modern version of the pyramid (to an extent).

The pyramid’s shell is then built against a series of stairway elements, giving it the integrity it needs to be lifted on and off the internal pyramid as one cohesive structure. This is where you’ll really begin to conjure up childhood memories, but never to the point that it gets dull. When all’s said and done, you’re left with a build even Khufu himself would be proud of. Probably.

There are no minifigures in 21058 Great Pyramid of Giza, mainly because – like all LEGO Architecture sets – it isn’t to scale with them and doesn’t really need them. (Mummified nanofigures entombed inside might have been a bit too grim for a LEGO set.)

In an age where LEGO sets are becoming more and more expensive – whether out of necessity or not – we’re very happy to see LEGO Architecture still offering affordable grown-up models.

Like the best LEGO Architecture sets, 21058 Great Pyramid of Giza prioritises the build experience above all else. It means you’re losing half a pyramid, but what you’re gaining instead – those lush desert surroundings – are what make this a model worthy of placing front and centre on the deepest shelf you can find. If this is what the Architecture theme can do with ancient history, the future is bright.

Support the work that Brick Fanatics does by constructing your own ode to the pharaohs using our affiliate links. Thank you!

If you’re in the mood for architecture but are put off by 21058 Great Pyramid of Giza’s halving of its source material, consider last year’s full 21056 Taj Mahal. Otherwise, the current LEGO portfolio is pretty short on deep dives into ancient history, but you could always aim for something a little more recent with 10305 Lion Knights’ Castle or 21325 Medieval Blacksmith.

How long does it take to build LEGO Architecture 21058 Great Pyramid of Giza?

You’ll spend roughly two hours putting together 21058 Great Pyramid of Giza, which is just a bit shorter than the 27 years it took to build the real thing.

How many pieces are in LEGO Architecture 21058 Great Pyramid of Giza?

21058 Great Pyramid of Giza contains 1,476 pieces, or roughly 2.3 million fewer blocks than the number used to construct the real-life pyramid. (1,476 is basically a rounding error in 2.3 million.)

How big is LEGO Architecture 21058 Great Pyramid of Giza?

How much does LEGO Architecture 21058 Great Pyramid of Giza cost?