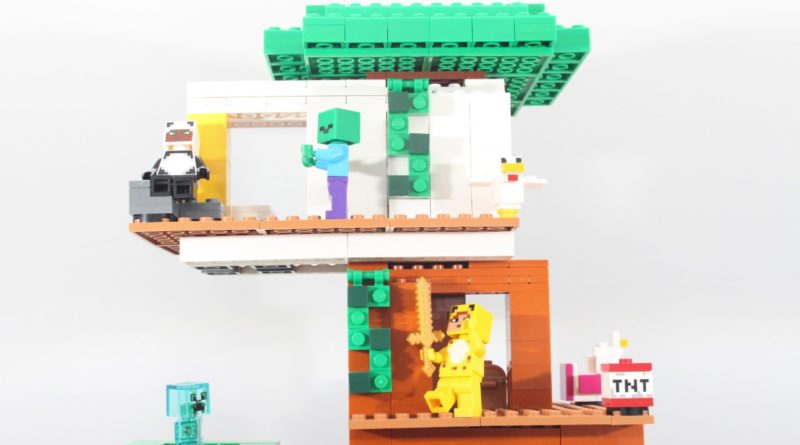 The LEGO Group’s take on Minecraft has journeyed all across the block-based world, with biomes from Ice Spikes to the Mesa and even other worlds included across the portfolio to date. However, the jungle is one of the rare locations that the theme is revisiting in 21174 The Modern Treehouse.

The 909-piece set tackles an iconic and eagerly-anticipated aspect of the game through the lens of reconfigurable modular sections – but can it succeed in delivering something fresh for Minecraft, or is this tree better felled?

Although it may be hidden by the various brick-built rooms of 21174 The Modern Treehouse, this is the first set to feature a full-sized Minecraft jungle tree, with the previous largest iteration arriving in 21125 The Jungle Tree House in 2016. The five-year difference isn’t too noticeable when it comes to how LEGO Minecraft sets are designed, with both sets sporting the same block-based appearance that mimics the aesthetic of the source material.

However, the twist in 21174 The Modern Treehouse is – unsurprisingly – its modernity, introducing furniture and other elements that simply don’t exist in Minecraft without modifying the game or downloading the right asset pack on the Bedrock edition.

These original furnishings include a sofa and armchair, as well as a small shelf stacked with various items. Other inclusions such as the bath can be recreated in the new game, and are reflective of updates that allow for such building, showcasing how familiar the designers are with the source material. Despite this, the modern furniture is a welcome addition to the set and helps to differentiate it from other LEGO Minecraft releases and interiors.

Each of the modules surrounding the tree can be removed one by one to reveal the thick trunk holding them all together. While relatively bare and without the vines that would usually be found on the trunk, this allows the modular rooms to be easily rearranged – though the detachable roofs on them can catch and fall off occasionally.

With everything removed, the jungle tree looks just as impressive as before, with a height notably above that of other LEGO Minecraft sets. It even includes a detailed stump that expands out, which is also not something that appears in the game but helps to support the structure.

The base of the build features two water pools, a small farm area, sand and a large patch of grass. Even with everything else included in 21174 The Modern Treehouse, this area feels a bit bare compared to how jungles appear in-game, and the addition of more leaves on the ground to cover the grass would have been preferred. Otherwise, this is the most accurate jungle set based on Minecraft yet.

Of course, you can also rearrange the various builds any way you choose, with the trunk showing no signs of giving way no matter how far we pushed it. This is largely thanks to the Technic structure that is built within the tree and stretches throughout the base, though this does limit customisation compared to other LEGO Minecraft sets.

Four normal minifigures are included in the set, split evenly between players and monsters alike. LEGO Minecraft has undergone a significant change in recent years with the introduction of skins rather than just using the basic Steve and Alex player models. The duo still appear in the theme, but the LEGO design team has introduced variety in the collection of characters since the launch of the skin accessory packs in 2016.

This continues with the Panda and Ocelot skins, both of which are new minifigure characters for the theme. LEGO Minecraft minifigures are not known for their detail, and there isn’t too much to praise in that department here. Simple patterns adorn the front and back of the torsos, depicting the colour scheme and design of each animal.

The head also features the respective player’s face with a pair of ears, completing the animal suit appearance. The usual accessories are included for these players to wield, this time in the form of a golden pickaxe and iron sword. Both skins are unique to 21174 The Modern Treehouse and offer value for collectors, though likely won’t be much of a deciding factor for anyone else.

Joining the cast of 21174 The Modern Treehouse are a normal Zombie and a Charged Creeper, which makes a rare appearance since its last inclusion in 21137 The Mountain Cave. The latter features a transparent head and blue sloped elements on the side to indicate that this mob is empowered by lightning and will create an even larger explosion. Between this minifigure, the normal green variant and the new Exploding Creeper in 21177 The Creeper Ambush, you’ll be able to recreate the full life cycle of the iconic Minecraft mob.

Two brick-built chickens and a cat make up the rest of the characters, coming in much smaller than the other minifigures. The chickens come in two forms – one mid-flight and flapping their wings, and one sitting happily on the ground. The tamed ocelot is made up of a specialised head element and a simple construction that features a moveable tail.

21174 The Modern Treehouse costs £99.99 / $119.99 / €119.99, and includes 909 elements and four full minifigures, as well as other mob recreations. In terms of the fated price-per-part ratio, the cost is a little high, especially when it comes to the number of minifigures. However, both of the animal-suited players are exclusive to 21174 The Modern Treehouse, and this also marks only the second appearance of the rare Charged Creeper, so there’s valued to be had.

For those who are looking to get the most model for their money, 21174 The Modern Treehouse is still an appropriate price thanks to the build being one of the tallest in the LEGO Minecraft range and sufficiently hefty as a result. While more detail would have been appreciated on the base to represent the jungle in what is otherwise an accurate brick-built interpretation, the price feels about right – and as always, all the better if you can find it on sale.

LEGO Minecraft has changed fairly little since the debut of the minifigure-scale sets in 2014, with the same specific elements sticking around for almost eight years. However, while the techniques of LEGO Minecraft models have remained mostly the same, the design team’s knowledge of the source material has clearly improved.

Compared to the two previous LEGO Minecraft jungle recreations, 21174 The Modern Treehouse manages to faithfully capture the impressive scale of the biome’s exclusive trees. At the same time, the LEGO Minecraft designers seem to have realised that occasionally straying from the source material can make for a more interesting building experience. This is evident in the inclusion of the furniture – an aspect of the model that makes the build more interesting than making the same block-shaped structures in different colours.

Add to that the ability to construct your own modular home using the pre-built rooms, and you have an enjoyable LEGO Minecraft set that only manages to miss the mark when it comes to the base, which is arguably the least important part of the build anyway.

21174 The Modern Treehouse is a good choice for longtime fans of the theme, or those who are new and looking to dive into the deep end with an expensive model. However, other than the exclusive minifigures, it’s not really a must-have – unless you have a particular affinity for the block-based jungles of Minecraft, that is.

How long does it take to build LEGO Minecraft 21174 The Modern Treehouse?

LEGO Minecraft 21174 The Modern Treehouse will take you just over an hour and 50 minutes to build in one sitting, which is relatively quick given the entry price.

How many pieces are in LEGO Minecraft 21174 The Modern Treehouse?

LEGO Minecraft 21174 The Modern Treehouse includes 909 elements, along with four minifigures and builds for a cat and two chickens.

How big is LEGO Minecraft 21174 The Modern Treehouse?

LEGO Minecraft 21174 The Modern Treehouse is fairly tall at 29cm high – reflecting the scale of the in-game trees – and pretty substantial in other dimensions at 20cm wide and 17cm deep.

How much does LEGO Minecraft 21174 The Modern Treehouse cost?