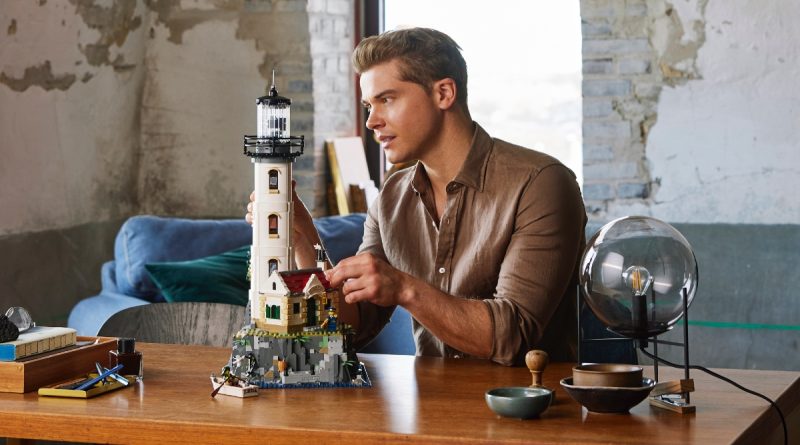 The newly-revealed LEGO Ideas 21335 Motorised Lighthouse is impressive for its height – but it’s what’s sitting at the bottom of the build that should really be grabbing your attention.

Adapted from a design by Sandro Quattrini, 21335 Motorised Lighthouse – like its source material – sits on a 32×32-stud baseplate. But where the fan builder represented the structure’s watery surroundings with a standard blue baseplate covered in 1×2 trans-clear plates, the LEGO Ideas design team has instead decorated the official set’s baseplate with a sprinkling of trans-clear tiles and 1×1 slopes.

It means a good chunk of the baseplate is left untouched and exposed, which would have been pretty jarring if it was cast in the company’s regular blue hue. The rest of the set uses grounded earth tones for accenting, including olive, sand and dark greens, regular and dark tans, and dark red, all of which standard blue would definitely have clashed with.

Fortunately, the LEGO Group had a solution up its sleeve: 21335 Motorised Lighthouse includes the first-ever dark blue 32×32 baseplate. It’s the first new 32×32 baseplate colour since 2015, and takes the total number of known colours for the piece to 13 – from various shades of grey and green through to red, brown, blue and white.

The last two new baseplates of this size arrived on shelves a full seven years ago, in 10070 Green Baseplate (which was a brighter green than previous plates) and 10246 Detective’s Office, which includes the only example of a reddish-brown 32×32 baseplate. 21335 Motorised Lighthouse’s dark blue baseplate is probably what you’d call unprecedented for 2022, but very welcome.

Whether we’ll ever see it beyond this set is less certain: as exemplified by 10246 Detective’s Office and before it, 10232 Palace Cinema – which includes the only red 32×32 baseplate outside 1978’s 231 Hospital – the LEGO Group doesn’t seem to have too many qualms about introducing one-off baseplates. Still, given how useful a dark blue plate is (compared to, say, red), here’s hoping it shows up elsewhere eventually.