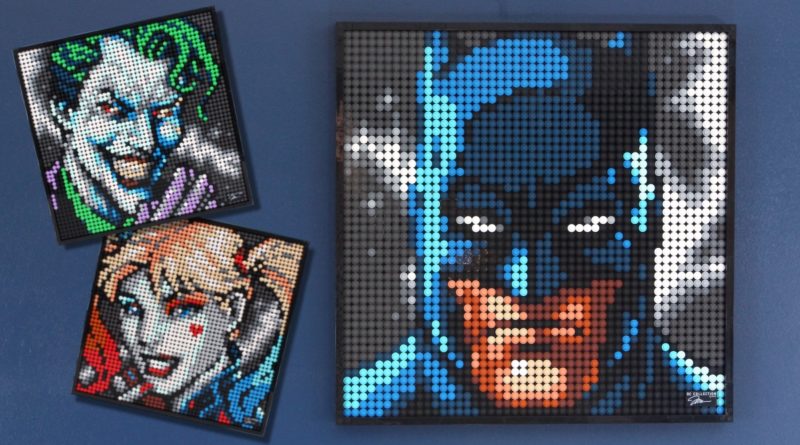 Rumours of a Batman-themed LEGO Art set seem to have been doing the rounds for as long as LEGO Art has existed – genuinely, the initial reports popped up just a month after the first batch landed on shelves in August 2020 – with various speculation touching individually on Michael Keaton’s 1989 Batman, Christopher Nolan’s The Dark Knight trilogy, and everything in between.

Absolutely none of that was on point, though, because instead the LEGO Group has chosen to partner with comic book legend Jim Lee – Chief Creative Officer of DC Comics, and artist on titles including Justice League, Harley Quinn and Suicide Squad – for 31205 Jim Lee Batman Collection, which includes a quintet of brand new and original drawings created solely for this set.

Three of those can be tackled (one at a time) with just a single copy of 31205 Jim Lee Batman Collection, while two more can be achieved by taking the plunge on multiple copies. But how has including parts for Bats, Joker and Harley Quinn affected the composition of each of their individual profiles, and can 31205 Jim Lee Batman Collection deliver without relying on iconic, existing imagery of those superheroes and villains?

If anything, 31205 Jim Lee Batman Collection only benefits from its originality. You can buy a poster of the Bat-logo from The Dark Knight, or artwork from Tim Burton’s gothic interpretation of the Caped Crusader, no problem; and you can argue for days about who your favourite Batman is – but the LEGO Group has smartly swerved those discussions, ensuring it can reach the broadest target audience, by coming up with something new and unique.

Jim Lee’s original depictions of Batman, Joker and Harley Quinn each lean into classic comic book stylings for the three characters, giving them a universal and timeless appeal, and ensuring they’ll (hopefully) find favour with as many DC fans as possible. The other consequence of that approach is that they’re also fairly generic, so if you’ve already got a personal Batcave filled with imagery of this trio, these artworks aren’t necessarily going to offer anything incredibly new – beyond, of course, their medium.

These are LEGO mosaics, after all, and therefore each follow exactly the same style as almost every other LEGO Art set (until 31206 The Rolling Stones came along and rewrote the rulebook). That means you’re going to spend most of your time with 31205 Jim Lee Batman Collection playing paint-by-numbers, for better and worse, as we’ve already outlined in previous reviews.

But that doesn’t mean it has to be repetitive. 31205 Jim Lee Batman Collection, how do I build thee? Let me count the ways:

Build one row at a time
Top to bottom, left to right, place down the studs for each row on the individual 16×16 grids. You’ll be hopping to and fro across the various plates laid out in front of you, never getting too bogged down in a single colour.

Build one column at a time
Same story, different direction. Good for those tiles with rows of the same colour, if you’re aching for variety.

Build layers, outside in
Start with a complete square around the edges, then move one stud in and complete the next square, and so on. This one’s pretty tricky to figure out from about halfway in, so good for a challenge.

Build layers, inside out
Reverse, reverse! (Are you singing the Cha Cha Slide yet?)

Build one colour at a time
If you want to feel like you’re actually painting across the canvas, pick one colour and run with it. On the grids where it really lands, you’ll be splashing one hue in chunks and spotty intervals, then turning to another and gradually filling in the gaps.

Build two colours at a time
You can probably see where this is going.

And so on, and so forth. You can even make a game of it! See how quickly you can fill a grid using one method, then try to beat that record! Or, if you like, see which of the above methods – or another method of your own, because who are we to dictate how you build – is the fastest way to assemble each grid. The canvas is your oyster. Build how you like! Let your inner artist shine! There are no rules!

Did I go insane while building 31205 Jim Lee Batman Collection? Perhaps. Who’s to say? Certainly not the medical staff at my local psychiatric authority, which is definitely worth writing down and publishing on the internet, for no particular reason.

If anything, my biggest takeaway from building, unbuilding, building, unbuilding and building 31205 is that I should have just bought three copies in the first place. Not only because prising all those 1×1 plates away is a task I wouldn’t wish on my worst enemy – to say nothing of re-sorting them back into navigable mounds of colour, where black and metallic dark grey are near-indistinguishable in certain light levels – but because I really want all three Bat-characters on my wall simultaneously.

This, then, is that rare LEGO Art set genuinely worth stocking up on multiples of, and that’s not only for how different each of the three individual portraits are in form and colour (and, therefore, build experience – at least in a theme where the use of colour is really the most interesting part), but for how Bat-tastic each of the three images looks.

As the instruction manual boasts, these three very different designs use a combined total of just 15 different shades, and colours that you might not expect to serve such a dual (or triple) purpose come into play frequently – that lightest of blues across Harley and Joker’s faces; the way dark blue contrasts the bright green of Joker’s hair; and the multitudes of tan and browns that form the Dark Knight’s chin.

We’re still working within the confines of just 2,304 pixels per standard frame here, so not all of the intricacies of Jim Lee’s sketches remain intact – but with the tools available to them, the LEGO Art team have done a great job of interpreting these original pieces into a trio of mosaics you’ll genuinely want on your wall. Somehow, not one of them has suffered from squeezing three completely different characters with completely different aesthetics (and colour schemes!) into one box.

And that means whichever one you construct first, you’re not going to want to tear it apart for either of the others. Instead, you’ll just go buy another copy. And what better praise is there of any LEGO set, but most especially one geared around delivering multiple design options?

There are no minifigures included in this or any LEGO Art set, but this feels like as good a place as any to say that delivering such brilliant depictions of Batman, Joker and Harley Quinn all within a single box feels like a real achievement for this theme. Just imagine if 31202 Disney’s Mickey Mouse had offered the same variety.

The LEGO Art range was one of the few to benefit from the LEGO Group’s price adjustments at the turn of 2022 – at least in the UK – as the standard RRP fell from £114.99 to just £104.99 for a single, standard-sized set. These are still an expensive proposition at full price, but if you make the most of them – by building, unbuilding, rebuilding and so on – there’s a lot of value to be had.

Of course, these things very regularly go on sale, which is usually the best time to stock up on multiples if you want to display all the different options – including the builds created by combining more than one copy. (We weren’t able to test those out.)

There’s not much more to say about the LEGO Art building experience than we’ve already touched on in previous reviews (see here, here and here). You’re getting exactly the same thing here – albeit in a broader colour palette than we’ve seen in other sets – so if you already know where you land on the whole paint-by-numbers situ, 31205 Jim Lee Batman Collection probably won’t change your mind.

Unless you’re a diehard DC fan, that is, in which case these three characters might just be enough to swing you back round to giving LEGO Art another go. They all look fantastic when finished – it’s difficult to set them apart, to recommend which to build and keep built – and are bursting with classic comic book style, refusing to be shackled by any particular DC movie interpretation of their designs.

And if you’re reading this as both a LEGO Art convert and a Batman fan, what are you waiting for? That mosaic won’t build itself. Otherwise I’d have added that method to the list up there…

Support the work that Brick Fanatics does by purchasing your copy (or copies!) of 31205 Jim Lee Batman Collection using our affiliate links. Thank you!

How long does it take to build LEGO Art 31205 Jim Lee Batman Collection?

You’ll spend roughly two and a half hours building a single mosaic in 31205 Jim Lee Batman Collection, then 60 to 90 minutes deconstructing it again. Repeat this process to build all three portraits, then leave the final one intact, and you’re looking at a total time of around nine to 11 hours. Not bad going for the price.

How many pieces are in LEGO Art 31205 Jim Lee Batman Collection?

There are a total of 4,167 pieces in 31205 Jim Lee Batman Collection. You won’t use all of those at once, though: 2,304 plates make up any one mosaic, with a handful more parts used for the canvas and frame.

How much does LEGO Art 31205 Jim Lee Batman Collection cost?