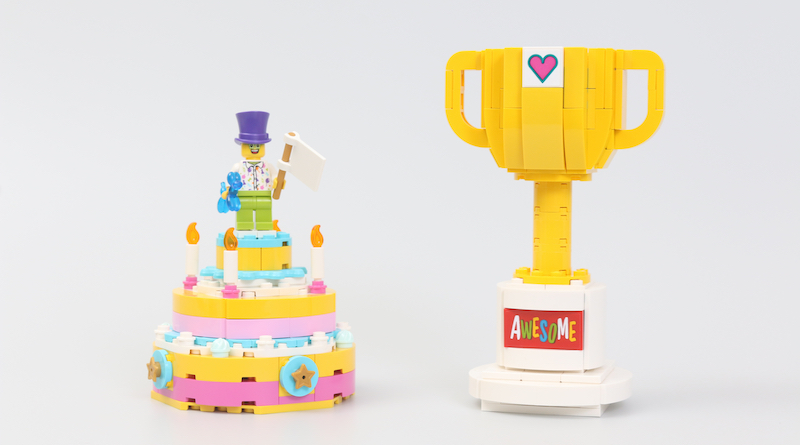 40382 Birthday Set and 40385 Trophy may both be novelty products, but do they pack more appeal than the average seasonal product?

Falling into the novelty gifts and builds area of the LEGO store, perhaps better referred to as Seasonal, are 40382 Birthday Set and 40385 Trophy, two small-sized builds of objects not usually seen in brick form.

The birthday cake comes in five inches tall with the included minifigure stood on top, and just under that with the flags in its place, whilst the trophy measures just under six inches tall.

The cake is a smart, solid build, packing colour, decorations and SNOT technique across three tiers, topped by either the clown minifigure included or the age flags. There’s a large sticker sheet also included with two sets of numbers 0-9 printed on it making it for any age – it may be aimed at children but the LEGO Group are aware this could serve as a great novelty gift for the adult fan of LEGO who has all the sets already.

But, if it isn’t for a birthday or for topping up a completist’s LEGO collection, there won’t be much cause to pick up this set and, to be honest, most people would also like a real cake at their birthday…doesn’t last as long, but does taste nicer than plastic bricks.

Meanwhile, the trophy with stand recreates its traditional source material very well and at a fun, realistic scale, allowing it to sit at home amongst all the other trophies for LEGO collecting, LEGO buying and LEGO building you may already have on the mantlepiece.

There’s a reasonable selection of 2×2 and 2×4 stickered tiles included, leaving up a good number of possible reasons for winning the trophy. We’ve awarded ourselves the trophy for being Awesome in Love. The only real way this set could be improved would be including the ability to fully customise what the trophy is won for, outside of the list of options provided. When you venture into unrealistic directions for a set to be improved upon, you know there’s little to fault it.

40385 Trophy and 40382 Birthday Set will be available from January 1 at LEGO.com. You can help support Brick Fanatics’ work by using our affiliate links.