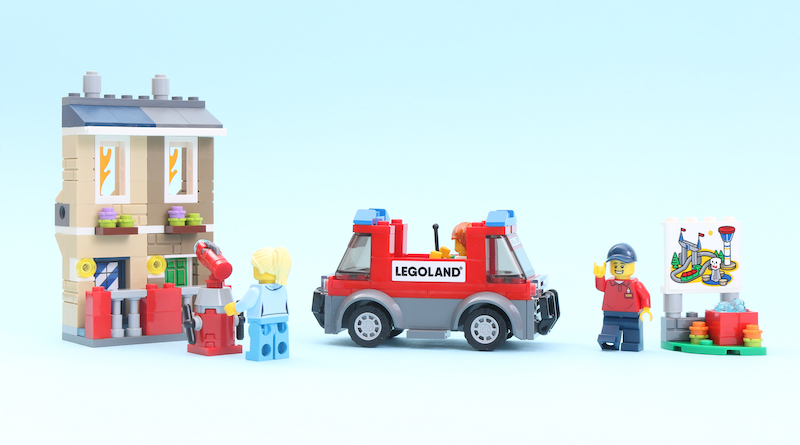 For completists and fans of LEGOLAND alike comes 40393 LEGOLAND Fire Academy, based on the theme park’s ride of the same name

Hot on the heels of last year’s 40346 LEGOLAND and 40347 LEGOLAND Driving School comes 40393 LEGOLAND Fire Academy, to recreate yet another area of the LEGOLAND theme parks in LEGO set form.

Given the design of these rides, it’s remarkable to consider that it’s taken so long for them to be re-converted back into true LEGO form. Thankfully they are now, creating a charming collection for anyone fond of the long-running family theme park.

The ride has been open in the UK’s LEGOLAND Windsor since 2005, drenching anyone brave enough to tackle the fires that puzzlingly keep re-setting alight. The premise is to drive your fire engine to the building, put out the fire and then race back to the station, with the first engine back the winner. On from the main park and the Driving School, this is the natural contender for the LEGO Group’s next LEGOLAND set.

And whilst it only has a piece count of 221, the three-minifigure set perfectly captures the aesthetic of the well-known LEGOLAND ride it is based on, with a simplicity highly reminiscent of some of the LEGO Group’s builds from the 1980s, just with the addition of the more modern stud shooter to hit those flames with.

Although without confirmation from the LEGO Group, who has kindly provided this set for review, it’s safe to assume (as the box art even suggests) that 40393 will follow in the footsteps of 40346 and 40347 and be exclusively available at LEGOLAND parks globally.

Notably, this is the second set after the more expensive 40346 LEGOLAND to include the LEGOLAND staff member minifigure, complete with blue trousers and red shirt. For the inclusion of that and another copy of the little map sticker of the whole park, this set should appeal to more than just those collecting all the LEGOLAND sets (including 2016’s 40306 LEGOLAND Castle and 40166 LEGOLAND Train).

Indeed, it’s also perfect for anyone wanting a memento of their experience tackling a wet and quite physically exhausting ride, or perhaps the opportunity to recreate the race back to the finish line and this time actually win…