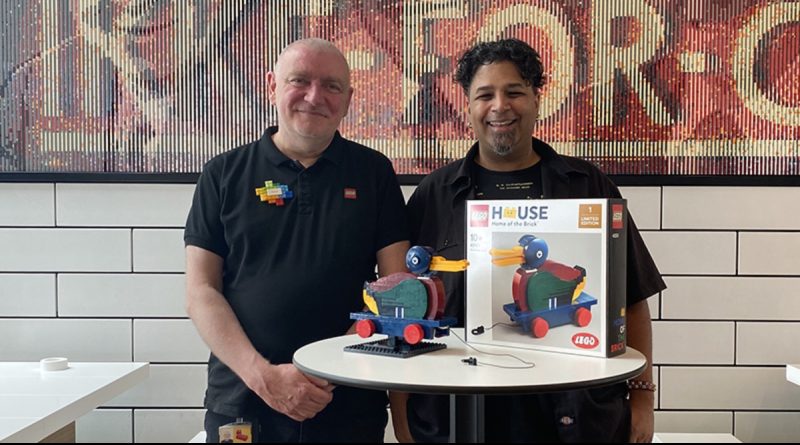 The limited-edition 40501 The Wooden Duck – normally sold exclusively at the LEGO House in Billund – is in stock at the newly-revamped LEGO Store in Leicester Square, London.

While the refitted and reimagined LEGO Store doesn’t officially open its doors until Wednesday, Brick Fanatics headed down this morning for a preview of everything the flagship location now has to offer. Keep an eye on the site for an in-depth look at the new store very soon, but for now, there’s already at least one excuse to make the trip into Central London: the chance to pick up a set otherwise available only in Denmark.

40501 The Wooden Duck is the first in a new series of limited-edition LEGO sets sold at the LEGO House, the interactive attraction that sits at the heart of Billund, the home of the brick. Originally released in 2020, the 621-piece recreation of one of the first LEGO toys has only been available to those lucky enough to visit the LEGO House in person, or by paying inflated prices on the aftermarket.

As of Wednesday, August 10, however, you’ll be able to buy it directly from the LEGO Store in Leicester Square for £69.99, earning VIP points in the process. There’s a limit of one set per customer, but it’s still likely to sell out quickly: only 800 copies are available in total. We also don’t know whether 40501 The Wooden Duck will be available at other LEGO Stores in the UK, so best to head down to the Leicester Square store as soon as it reopens for the best chance of bagging the exclusive set.

The newly-refurbished Leicester Square LEGO Store opens to the public at 10am on Wednesday, August 10. In the meantime, don’t forget to check out our interview with the designers behind 40501 The Wooden Duck, along with our detailed review of the historic set.