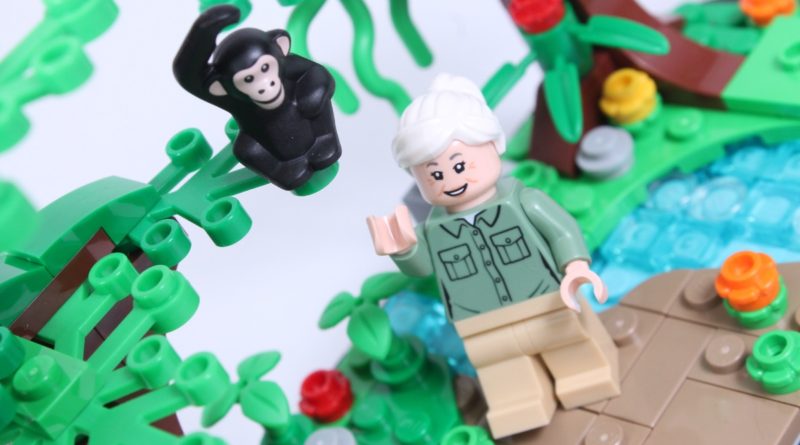 40530 Jane Goodall Tribute is a delightful LEGO gift-with-purchase available from March 3 to 15, with a surprisingly low required spend.

It’s with some relief that 40530 Jane Goodall Tribute comes in at almost half that all-too-high threshold, instantly making it more accessible and ensuring more of us will be able to pick it up. It’s timed almost perfectly, too, coming in just two days after the launch of dozens of new sets (rather than several weeks after the fact, as per the taxi).

But what of the set itself? Is there enough here to justify delaying your order of all the new stuff, particularly with one eye on rapidly-depleting stock levels over the past two years? In short: yes. At least if you like chimps.

Just as this year’s LEGO CITY 60326 Picnic in the Park is all about the squirrels, there’s no getting away from the fact that 40530 Jane Goodall Tribute is all about the chimps. Three of them, in fact, resurrected from Collectible Minifigures Series 5 and 7 in 2011 and 2012 respectively, which come alongside a minifigure of primatologist, anthropologist and the world’s foremost expert on chimpanzees Jane Goodall (natch), all wrapped up in a colourful and space-friendly display piece.

It’s a surprisingly meaty build – especially given, again, that lower spend threshold – and exactly what you’d expect from a set meant to represent the life of someone who’s spent more than six decades studying wild chimps. It doesn’t really try to go beyond that, though: the trees are a tried-and-tested technique by this point, and maybe a little too basic next to the more detailed terrain.

An extra layer of plates would have also helped the small stream to look a little more convincing, allowing for a full waterbed of trans-blue tiles, but really, it’s hard to poke too many holes in a free gift that’s arguably already overdelivering (and includes three chimps!) – at least compared to certain other GWPs, and especially for its relatively lower required spend.

Perhaps that praise towards 40530 Jane Goodall Tribute’s order threshold is not really due, though, if only because it’s the benchmark most gifts-with-purchase should be topping out at anyway. The reality is that recent £200+ thresholds have warped the value proposition across the board, so that what might have once been considered good value now looks like great value.

Is that a deliberate tactic from the LEGO Group? Who knows. The important bit is that 40530 Jane Goodall Tribute will be available from March 3 to 15 with orders of only £120 / $120 / €120 from LEGO.com and in stores, and no matter which way you slice it, that’s still an offer that’s hard to resist. And, you know. Chimps!

Support the work that Brick Fanatics does by ordering your new LEGO (and grabbing a free set!) using our affiliate links. Thank you!