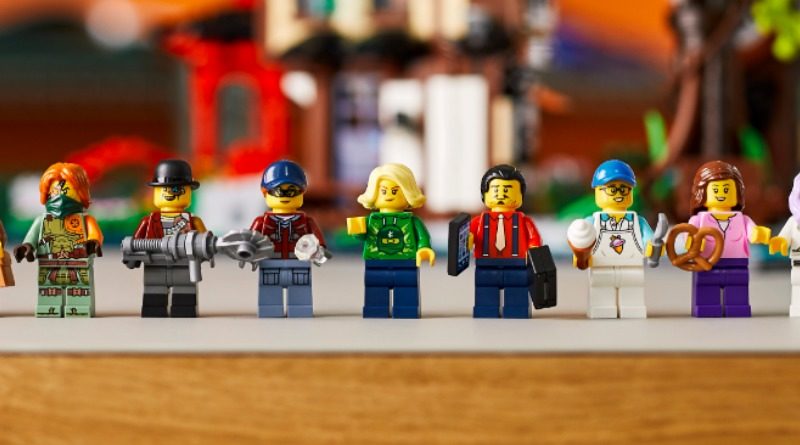 The latest NINJAGO Legacy set is technically an add-on to two The LEGO NINJAGO Movie sets in its format and design, but it’s actually based on the long-running LEGO NINJAGO TV series. That means it’s packed with references to all 13 seasons of the show – including in its character line-up.

Starting from the left, the selection includes Jay, the blue ninja and master of lightning. Jay is wearing a more casual outfit but still includes the smiley face and lightning pins that first appeared in his Secrets of the Forbidden Spinjitzu outfit. Next to him is Nya, the yang to his dying, who’s also wearing a casual outfit.

Cole is also sporting some urban clothing with a tank top. Cole is wielding a controller from the Prime Empire series of NINJAGO sets. Kai and Zane are both next wearing their Legacy ninja suits, much like Lloyd. However, Lloyd is this time depicted in his younger form before he was magically aged in the second season of the show.

Misako includes a new torso print and makes her second appearance in her TV show form since 70751 Temple of Airjitzu. Both Clutch Powers and Ronin are also returning with Clutch only appearing in 40342 MF Set – NINJAGO 2019. Clutch is an explorer who discovered Aspheera’s temple in Season 11 and Ronin is a skilled bounty hunter.

As the last of the TV-series-specific characters, the Mechanic makes his grand debut as one of the more prominent NINJAGO villains in recent seasons. The Mechanic uses his mastery over technology to steal, deceive and plot, and was responsible for unleashing Unagami in the Prime Empire season of the show.

The other minifigures are mostly new characters made just for this anniversary model but feature some new and interesting prints such as the Ice cream apron, the Lloyd T-shirt which also appears in 60291 Family House. Also interesting is the use of a baby carrier on Scoop the robot.

Finishing this massive assortment is an exclusive gold anniversary minifigure of Sensei Wu, with a golden beard, hat staff and more. An included stand reveals that this minifigure is part of the Legacy collection of minifigures that are dotted throughout the 2021 NINJAGO sets.

A total of 11 NINJAGO Legacy sets will launch in 2021. Eight are already available at LEGO.com, while two more are set to arrive in June. Click here for a closer look at 71741 NINJAGO City Gardens, and click here to see it lined up next to 70620 NINJAGO City and 70657 NINJAGO City Docks.