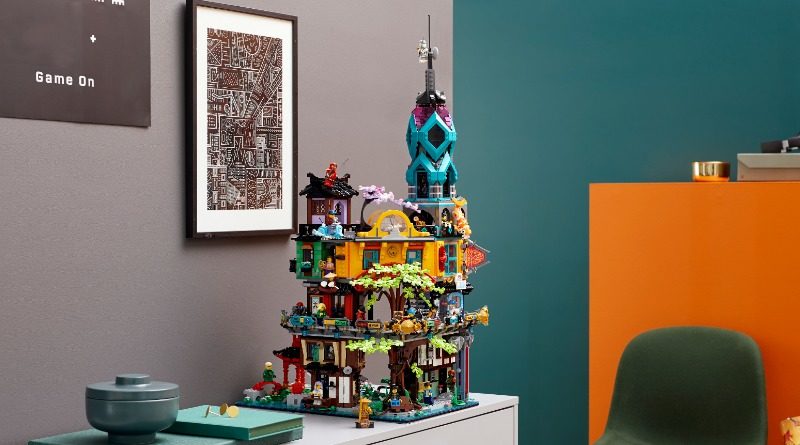 The 5,685-piece NINJAGO Legacy set – which was first unveiled in the Canadian consumer catalogue in December – is part of the company’s wider celebrations of the theme’s 10th anniversary, and is consequently based on the long-running TV show. That marks a departure from the two previous NINJAGO City sets, 70620 NINJAGO City and 70657 NINJAGO City Docks, which were both based on The LEGO NINJAGO Movie.

Still, that apparently won’t stop it from combining with those long-retired sets, in both format and aesthetic. You can see here just how well it sits next to those other modular building-style sets, but to give you a clue: pretty nicely, even if not necessarily in the configuration the LEGO Group suggests, or one that’s going to be easy to display on a single shelf.

71741 NINJAGO City Gardens includes 19 minifigures – one of which is a golden Master Wu, joining the other six golden ninja scattered across this year’s Legacy sets – plus Master Wu’s dog. You can take a closer look at those minifigures here, and check out a full gallery of images for the set here.

The LEGO Group has confirmed you’ll be able to order the set from February 1, but there’s no word on whether VIP early access will begin today, as originally promised in the Canadian catalogue. Either way, you’ll need to part with £274.99 / $299.99 / €299.99 to take it home.

A total of 12 NINJAGO Legacy sets are due to launch over the course of 2021, all celebrating the past decade of LEGO NINJAGO. Nine of those are already available to buy, while two more as-yet-unannounced models will arrive in June. 71741 NINJAGO City Gardens completes the Legacy line-up.